Do You Know that the Greeks Held the First Olympics?

Home > Greek Culture > Ancient Greek Histo… > Do You Know that…

Written by GreekBoston.com in Ancient Greek History Comments Off on Do You Know that the Greeks Held the First Olympics? 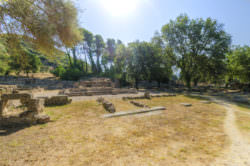 Most of us know all about the Olympic Games since they are held every four years and feature athletes from all over the world. However, we all may not realize that they actually had their origin in Ancient Greece. Even though it is pretty well understood that the Greeks are associated with originating the Olympics, people don’t necessarily understand the details. The Greeks are not only responsible for creating the ancient Olympic Games, but the first modern games were also held in Greece. Here’s more information about this:

Overview of the Ancient Olympic Games

The Ancient Olympic Games got their start as a religious festival that was held in honor of Zeus, the King of the Gods. They always took place in Ancient Olympia and many of these places were still in existence. The games first began as a simple athletic event with a limited number of events, such as track and field. Over time, however, the games got more elaborate and some of the winners even achieved celebrity status in Greece. The first events included the pentathlon, running, jumping, diskus through, pankration, and wrestling. People would come from all over Ancient Greece to compete in the games and although the games themselves had a tendency to be a little political, warring city-states experienced a temporary truce so that they could enjoy the games. They were known as having a peacekeeping affect on the city-states. There were other similar games that were held throughout Greece, but the Olympic Games were the most popular.

Learn About the First Olympic Games

The exact date of the first Olympic Games is under debate, but most seem to believe that it took place around 776 B.C. They were held on a regular schedule up until 393 AD when they were banned by the Roman Emperor Theodosius I banned them. They took place for over hundreds of years before they were banned and those who participated, included the athletes and spectators, always looked forward to them. However, by the time the Romans occupied Greece, they were Christians, and it always made them uncomfortable that the games had their roots in the pagan religion of the time.

The Games Were Reinstated in 1896

After a little more than 1500 years since the Emperor Theodosius banned the Olympic Games, they were held once again. The first modern games took place in Athens in 1896 in honor of the long standing ancient tradition of the Olympics. The games have been held almost every four years like clockwork, with a few instances that the games weren’t held, such as during World War II. In fact, the games weren’t held from 1940 to 1948 because of the war, but they have been held like clockwork ever since. Although much has changed with the games since ancient times, some of the events are still very similar, such as some of the track and field events, equestrian, and wrestling.

People from all over the world meet to compete and watch the Olympic Games, but many don’t know that they originated in Greece!