Who Were the Top Ancient Greek Philosophers?

Home > Greek Culture > Ancient Greek Histo… > Who Were the Top… 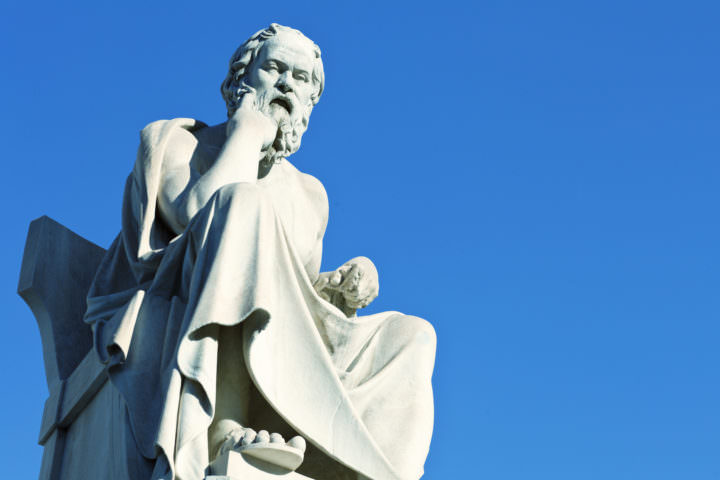 Western philosophy begins with Greek philosophy. The ancient Greeks were the first civilization that began to ponder the big questions of life. Without the Greek philosophers, the entire field of philosophy as we know it wouldn’t exist, or at least would be radically different. Here are the five most important Greek philosophers and their contributions to serious thought:

Pythagoras was a mathematician who is credited with developing the Pythagorean Theorem, which describes the fundamental relationship of the three sides of a triangle. He was alive from 570 BC to – 495 BC. Although he is better known for his mathematical contributions, his philosophical thoughts also exerted great influence on later philosophers, particularly Plato. Like many of those who followed him Pythagoras established his own school, which had many adherents.His main contribution to philosophy was teaching that people should try to live a harmonious life. He also stated rules for daily living and may also have been the first individual to put forth the idea that the earth was round.

The most well known of all Greek philosophers and arguably the most influential in some schools of thought, Socrates was the first to fully apply philosophy to daily living. He is best known for the Socratic Method that uses discussion, argument and dialogue to come to a conclusion. This way of finding truth was radically different than what his predecessors did as they essentially based their ideas on their own interpretations. The Socratic Method is essentially evidenced-based philosophy. As he was a stonemason by trade, he never wrote down any of his philosophies. That was left to his followers, particularly Plato. His radical thinking eventually led to his downfall and death, as he chose death by suicide rather than exile. He was alive from 469 BC to – 399 BC.

Plato, Socrates’ most famous student, combined his teacher’s ideas and took them several steps further. He was alive from 427 BC to  347 BC. Plato is known for his three-pronged approach to the universe that uses Socrates’ ideas, along with metaphysics and nature theology. His theory of forms also takes a threefold approach that combines dialects, ethics and physics. He is widely regarded as the father of political science, with his work on the subject, “The Republic,” describing the workings of a utopian society. Plato is also the founder of possibly the first recognized institution of higher learning, the precursor to medieval universities, The Academy in Athens.

The philosophical son of both Plato and Socrates, Aristotle believed that all of the peoples’ knowledge was based on their perceptions of the outside world. His approach differed from Plato’s in that he broke down knowledge into distinct categories. Aristotle studied a number of different subjects that contributed to his philosophical theories, including ethics, biology, mathematics and physics. Many of his theories on biology were ultimately dismissed. Aristotle’s philosophy became the basis of much of Western religious thought, especially that of Albertus Magnus and Thomas Aquinas. He was alive from 384 BC to 322 BC.

Generally unknown outside of philosophy circles, Thales of Miletus is considered the father of Greek philosophy. He predates all of the preceding philosophers in the list, having lived in the 7th century BCE. His observations all came from what he could see physically, however, what he espoused proved to be the pivotal point for all of the Greek philosophers who came after him. He was the first individual that tried to explain natural phenomena without including theological origins. He also established the basic elements as earth, air, fire and water and its the first individual to discuss evolution in a scientific manner. He was alive from 620 BC to 546 BC.

Although there were a lot of philosophers who came from Ancient Greece, these are amongst the most influential and well known.