Most of us know the legendary stories of King Minos, the Minotaur, and Daedalus, and other characters from Greek Mythology. As it turns out, the stories themselves could have originated with the Minoans, who inhabited the island of Crete. In fact, the Minoan Civilization is the oldest recorded civilization in Greece. Here’s more information:

Dating back to around 2200 BC, the inhabitants of the island began forming a civilization we now call the Minoans. It actually wasn’t until the early 1900s that archeologists discovered this pre-ancient Greece society. An English archeologist, Sir Arthur Evans began digging in 1900 in what is modern-day Heraklion, and uncovered ruins from the Minoan society. He named the Minoan society after the King Minoan.

As the Minoan society is a more recent discovery, and that not a lot of recorded information exists about the culture, we have limited knowledge about the Minoan civilization. Although there is some archeological evidence that suggests Crete was inhabited as far back as 7000 BC, we do know is that between 2200 BC and 1450 BC, the Minoan civilization blossomed on the island of Crete.

The Minoans were not a Greek civilization; however their cultural traditions had a very large influence on those living on mainland Greece who evolved into the Ancient Greeks. The Ancient Greek culture took cues from the Minoans in forming their own language, culture, and even political systems. 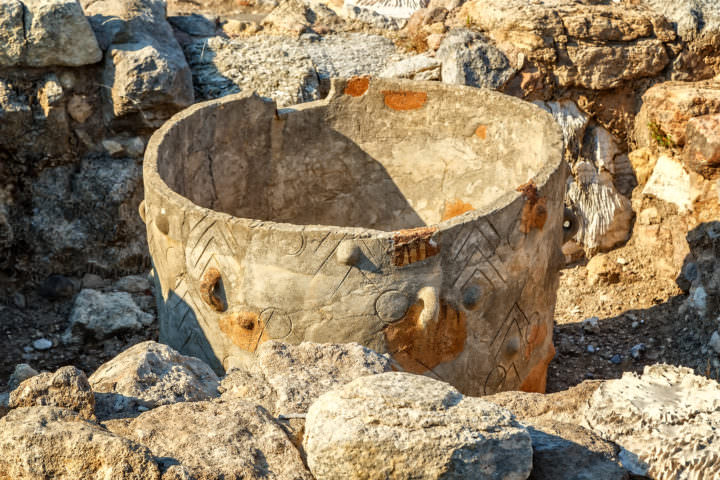 There are many unique aspects of the Minoan Culture that are worth noting. One of the biggest is the language. Much like ancient Egypt, the earliest forms of written communication involved pictures, which then evolved into letter like symbols. Researchers have discovered thousands of Minoan tablets written in the Minoan script, which was dubbed Linear A Script. The Minoan writing system was used by a later civilization, the Mycenaean’s, to create a different type of script (Linear B Script), which was the basis for the Greek language. Unfortunately, the language samples have het to be translated.

Religion also played an important role in the Minoan Civilization, which is something that archaeologists have determined by what they’ve found at the Minoan dig sites. Ritual items such as statues, altars, and more have been uncovered and some are now on display in museums in Greece and throughout the world.

When archeologist, Sir Arthur Evans, began to uncover the ruins of the Minoan period, he discovered the remains of a palace in the Minoan city of Knossos (which is now Heraklion). The palace remains suggest that the Minoan society was ruled by a monarchy. Cities and towns on the Greek mainland were influenced by the Minoan society in that Greek cities tended to be organized around a palace-like complex. 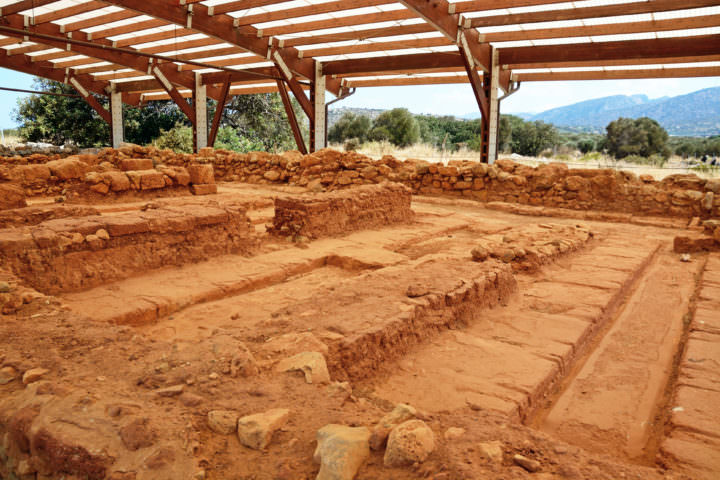 The Minoan Crete was divided into six different political regions that were discovered based on palace ruins in each location. These six regions include:

The Minoan people thrived on trade. Their entire economic system was based on buying and selling goods with the other societies in the region, thanks to Crete’s central proximity in the Mediterranean Sea to areas like modern-day Turkey, the Middle East, Africa, and Italy. One of the biggest items of trade was the metal, tin which the Minoan’s mixed with copper from Cyprus to create Bronze. Most of the artifacts found from the Minoan period, including tools and weapons, were all fashioned out of bronze. This is also why this time period in Greek history is known as “The Bronze Age.”

Around 1450 BC, the Minoan empire collapsed. Some historians believe that it was a large-scale natural disaster that led to the demise. Others believe it was another civilization that took over. Although not definitively proven, some researchers believe that a new civilization, the Mycenaean people, took over the Minoans, which created the first ancient Greek society.