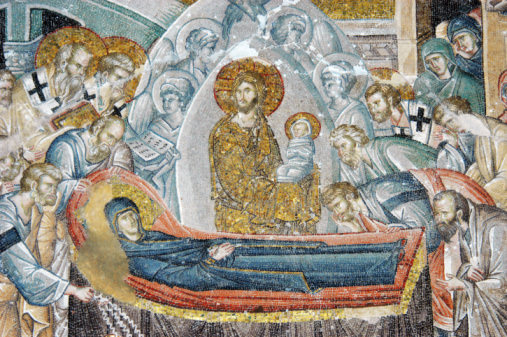 The “Dormition of Our Most Holy Lady, the Theotokos and Ever-Virgin Mary” is the feast of the “falling asleep” of the Theotokos. The Greek word for the feast, Kimissis, means falling asleep. The phrase “fallen asleep” is found in three books of the New Testament, Gospel of Matthew, and St. Paul’s letters to the Corinthians and to the Thessalonians. It metaphorically means death, but with the hope of the resurrection and the knowledge of Christ’s victory over eternal death. We celebrate the day in which the saints departed from this world, and this is no different for the Theotokos.

This feast is celebrated every August 15th after the 14 day fast starting on August 1st. In the common practice of Orthodox Christians that I know, this fast seems to be the 2ndmost serious, second to Great Lent. Many parishes offer Small and Great Paraklesis Services to the Theotokos throughout the 14-day period. When I was in Greece in 2007, I was there for a large portion of the month of August and the feast played a major role in the vacation of the people, as Athens was almost completely empty because everyone went on vacation or back to their family in other parts of Greece.

The history of the Dormition is not found inside the Bible, as all of the New Testament is about the life of Jesus, His teachings, the spread of the Church by the apostles, and the Revelation. From what I understand the story of the Dormition must have been transmitted orally until it was written in several writings in the 5th and 6th centuries. These writings are said to disagree with each other, so the Church just kept the essential material.

What the Church understands is that at the time of the Theotokos’ death all the Apostles, minus Thomas but including Paul, were brought miraculously to Jerusalem (I have heard they were brought by cloud, too). At the moment of her death, Christ descended and took her soul to heaven. Her body was then laid in a tomb near the Garden of Gethsemane. Three days later, Thomas arrived, and asking to see her body in the tomb, when he arrived, the tomb was found empty. An angel and later appearances of the Virgin later confirmed this.

So there is some conflict between the words ‘Assumption’ and ‘Dormtion’ to describe this feast. A western belief is that the Theotokos did not have a natural death, but was assumed into heaven in bodily form. The Orthodox Church holds that she died a natural death and that her body was taken to heaven.

Liturgically, in some places, the Church remembers this event much like Holy Friday. There is an Epitaphios (cloth with icon, representing the body of the Theotokos) as well as a Kouvkoulion (a structure which can be carried representing the tomb). There are Enkomia or Praises known as “Lamentations,” which mirror those of Holy Friday and similarly match up with Psalm 118.