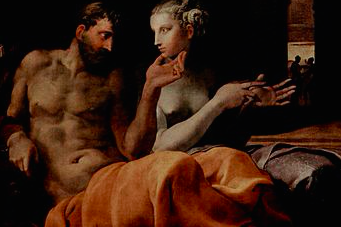 Penelope is one of those characters in Greek mythology who only made an appearance for a short period of time. She was mentioned in the Odyssey and is known for being the wife of the hero, Odysseus. In fact, the plot of the Odyssey is completely focused on the hero and his quest to get back to his wife and family in Ithaca. Although she only technically made an appearance for only a few scenes, the hero’s awareness of her was something that was on his mind for pretty much the whole work. Here’s a look at her story:

Penelope was actually the daughter of two famous figures in Greek mythology, Icarus, the individual who few too close to the sun in his manmade wings, and Periboea, who was known for being one of the nymphs. However, depending on the source, Icarus may not have been her father but rather her brother. In other words, her parents were up for debate and varied according to the origin of the story.

Thanks to the Odyssey, we do know for sure that Penelope was the Greek hero Odysseus’s wife. Because of the Trojan War and then the hero’s long journey home, we know that the couple endured many years apart. In fact, the plot of the Odyssey centers around his desire to get home. However, his journey was filled with perils and it took him a long time to return to his family.

Penelope was especially known for her strong character. While Odysseus was away, he is known for having taken many lovers. Although not all of his experiences with these lovers were pleasant, the main point is that he still had lovers. In contrast, Penelope stayed devoted and faithful to him the whole time he was gone. The story suggests that she had plenty f opportunities to take a lover or get remarried, but she refused. Throughout Greek mythology and within the Greek culture, the name “Penelope” has always been associated with fidelity.

As the story goes, Penelope was finally persuaded to take a new husband, but in her heart she still wanted to be faithful to her marriage. Although she consented, she made her requirements next to impossible because she didn’t want to be with anyone other than Odysseus. So, she organized a competition where the suitors needed to prove that they were good at certain tasks. In her heart, she knew that only her husband, Odysseus, could pass the tests.

Meanwhile, Odysseus finally made his way home. He found out about the competition but rather than tell his family he was home, he entered the contest in disguise. He ended up besting each of the competitors and finally when he won, he revealed his true identity to his wife.