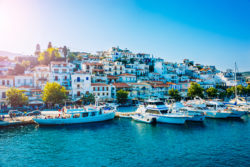 which are inhabited. Skiathos is one of the inhabited islands. Though small, the island consists of approximately 60 sandy beaches with beautiful azure waters. The main paved road on the island runs along the southeastern stretch of the island with dirt roads branching off to the rest of the island. The island of Skiathos is wooded mostly with Aleppo Pine. There is a small Stone pine forest located at Koukounaries. Figs, olives, plums, almonds, and grapes also grow on the island.

The island of Skiathos played a small, but significant, role in the Persian Wars when the Persians went to war with 300 Spartans. In 480 BC, the fleet of Persian King Xerxes was hit by a storm and badly damaged off the coast of the island. The Greek fleet would take this opportunity to block adjacent seas to prevent the Persians from making their way to the mainland. The Persian fleet would be defeated a year later at the Battle of Salamis.

Greece’s first flag was designed and hoisted at the Evangelistra Monastery in Skiathos in 1807. Prominent Greeks and religious figures were in attendance. The Evangelistra Monasatery had been built in 1704 by monks from Athos. The location would play a part in the Greek War of Independence as a hideout for Greek rebels.

The movie “Mamma Mia” was filmed on the island of Skiathos, which has made it a popular location for fans of the movie to explore and find spots the recognize from the film. The contrast between the lush, green countryside and the active nightlife also makes the island a popular place to visit.

House of Papadiamantis – This museum is located in town. It was the home of Greek writer Alexandros Papadiamantis. Museum features personal items of the writer as well as folklore pieces.
The Castle of Skiathos – Located on the northern side of the island. It is a former medieval town built on a rocky cliff. The Castle had 300 dwelling units and 22 churches.
Banana Beach – 13 km south-west of Skiathos Town. A sandy, organized beach. Also nudist friendly.
Agia Paraskevi Beach – 8 km south-west of Skiathos Town. An organized, family friendly beach. The perfect beach if you are into water sports.
Skiathos Town – Visiting the main town offers a lot of sites. Bars, clubs, restaurants, and shopping are in abundance. Visit the old port for a picturesque walk.
Church of Three Bishops – Located in Skiathos Town. The church was built in 1846. Features a tall bell tower.
Monastery of Evangelistra – Located 5 km north of Skiathos Town. Built in the early 19th century. The monastery contributed to the Greek War of Independence.
Monastery of Panagia Kounistra – Built in the 17th century. Located in a beautiful green mountainous area. Features frescos from the 18th century.
Sea Caves – If you’re looking for a unique site-seeing trip, take a boat tour to see the sea caves. The water is crystal clear. The landscape is wild and breathtaking.
Lalaria Beach – Located on the northern side of Skiathos Island. A pebbled and non-organized beach. Sea caves are nearby, ready to explore.

BELOW ARE INTERESTING ARTICLES ABOUT SKIATHOS, GREECE: 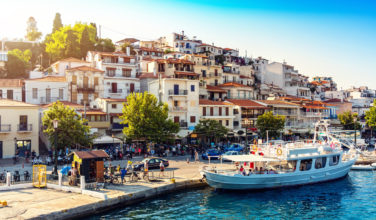 Things to Do in Skiathos, Greece

Skiathos is a Greek island in the Aegean Sea. Skiathos is full of culture, history, and beauty. The beaches offer breathtaking turquoise waters, the pine forests add... Read More 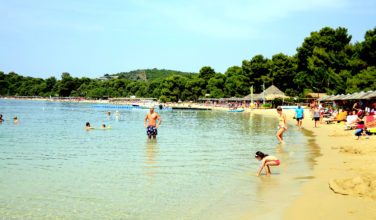 Best Beaches to Visit on Skiathos

Skiathos is one of those gorgeous Greek islands that seems to have been created for the purpose of its beauty. In fact, it is especially known for its beaches, so...... Read More 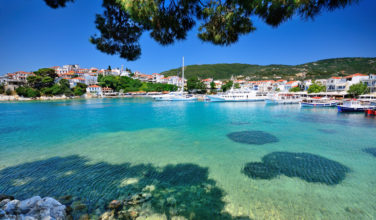 Thanks to its many beaches, Skiathos makes an ideal destination for families. There is more to see and do around Skiathos though. When visiting, you will have a vari... Read More 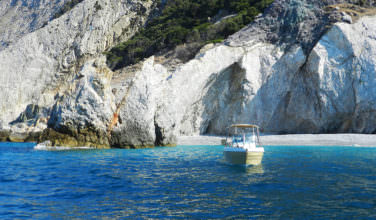 Visit Lalaria Beach on the Island of Skiathos

When you decide to visit Greece, chances are pretty good you are thinking of two things – visiting an island and spending plenty of time at the beach. Sure, th... Read More