Written by GreekBoston.com in Modern Greek History Comments Off on Brief Overview of the History of Cyprus 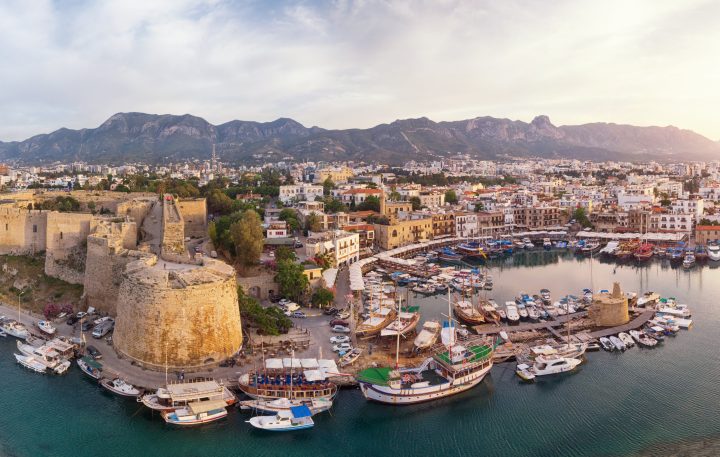 Cyprus has a rich history dating back for thousands of years, if not longer. Its history is just as turbulent as it is long. today, Cyprus is split where part of the island is ethnic Greek, and the other part is ethnic Turkish. It is currently a member of the European Union, with a population of around 875,899.

The island has a prime location in the sea, and it also has a fair amount of its own resources. The island produces much of its own food supply. The island is in a strategic location, though, which has made it vulnerable. Here’s an overview of the history of the island of Cyprus:

The first Cypriots were farmers, and archeological evidence suggests human civilization formed sometime around 9,000 B.C. The oldest evidence of a more advanced culture is the grave of a cat dating to that period of time. The island’s rich copper deposits allowed its inhabitants to progress into the Bronze Age around 2,500 B.C. Nine hundred years later, evidence of an advanced writing system emerged and it’s thought that the local culture flourished for a millennium until outside invaders threatened the island.

During this time of prosperity, a civilization known as the Phoenicians came into power. The Phoenicians were an advanced sea-faring civilization that expanded their influence throughout the Middle East by means of trade.  Starting around 800 B.C., rule over Cyprus changed hands multiple times. The first insurgents were the Assyrians.  Three hundred years after that, Cyprus was conquered by the Persian Empire as it expanded westward. After 200 years of Persian rule, Alexander the Great took control of Cyprus in 333 B.C.

After Alexander’s death, his general Ptolemy took control of the region, which included Egypt at the time, and ushered in an age of Greek influence. That influence persists to this day. In 58 B.C., the Romans took control of Cyprus and ruled until the fall of the empire in the 5th century A.D. They introduced Christianity to the Cypriots, another long-lasting cultural revolution for the island.

When the Roman Empire fractured in 476 A.D., Cyprus came under the control of the Byzantines. Under Byzantine rule, Cyprus thrived for over 700 years. In 1184, Cyprus declared independence from the Byzantines but was soon conquered by Richard I of England. Richard ultimately sold the nation to the French Lusignans, who installed a feudal system where the upper-class Catholics oppressed the lower-class Orthodox Cypriots.

After a brief period of brutal Venetian Rule, the Ottoman Turks eventually conquered Cyrpus in the late 1500s. At first, the Cypriots embraced Turkish rule, which did away with the feudal system and restored harmony with the Orthodox population.  Centuries later, in 1875, Cyprus became an important strategic outpost for the British. The opening of the Suez Canal now meant Cyprus represented the bridge between the East and the West.

Following the Central Powers’ defeat in WWI, Britain took control of Cyprus. Many Cypriots fought for the British during WWII, but the schism between the Greek Orthodox and Turkish populations had grown. The Orthodox wanted union with Greece, but the Turks supported the British.

After a decade of in-fighting between the Greeks and Turks, Cyprus gained full independence in 1960 and elected Archbishop Makarios as its President. Unfortunately, the hostility continued and the Greeks staged a coup in 1974 that split the island in two. Eventually, the Turks formed their own government in 1983, which they called the Turkish Republic of Northern Cyprus. That division remained until 2004 when Cyprus as a whole joined the European Union. Today, after a period of economic instability in the 2010s, Cyprus is again growing.

Cyprus is a beautiful island country that saw the rise of some of the earliest civilizations. After a long and bloody history punctuated by periods of prosperity, Cyprus is now a nation with a growing economy and part of the European Union.