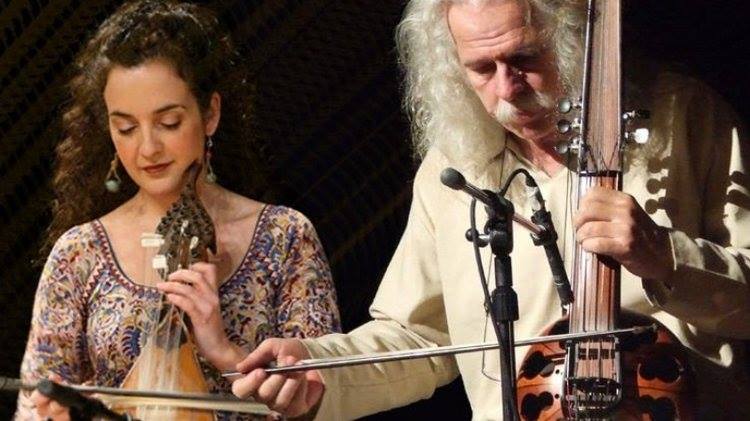 Ross Daly
Many years before what we call “World Music” appeared on the scene, certain individuals had already understood the enormous value and vast variety of the world’s various musical traditions and had dedicated their lives to their study. One such person is Ross Daly.

KELLY THOMA
Kelly Thoma was born in Piraeus in 1978. Since 1995, she has been studying the lyra with Ross Daly and three years later started travelling with him and his group, “Labyrinth”, participating in concerts in Europe, Asia, Australia and the U.S. She has taken part in many projects with musicians from various different traditions from other countries.

The Aya & Tano Collective
Led by Aya Safiya and Tano Brock, The Aya & Tano Collective is a Boston based eclectic musical project that plays traditional Greek, Turkish, and Albanian music. Both Aya and Tano grew up in the SF Bay Area where they were raised in a thriving community of Balkan, Greek, and Turkish musicians. In 2015, they embarked on a journey to Eastern and Southern Europe in search of music. With the songs they collected throughout their travels, they began to build a repertoire and perform regularly. Since moving to Boston, they have connected with Panagiotis Aivazidis, a qanun player from Serres, Greece, Cypriot bassist Manos Stratis, and Palestinian percussionist Alber Baseel. Together they play music from various regions of Greece with an electrifying chemistry.