Skopelos is an island in western Aegean Sea. Skopelos is one island of many that makes up the Northern Sporades island group. The main port and 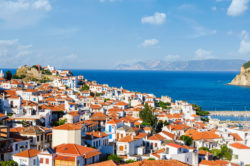 municipal center of the island are also called Skopelos. The island geography includes two mountains that are over 500 meters tall, other mountains in the western and eastern areas of the islands, many plains, and cliffs that fall into the sea. There are not many bays or natural harbours on the island. Skopelos is one of the greenest islands in the Aegean Sea. The island is also home to a wide range of flowers, trees, and shrubs. The majority of forests are made up of Aleppo Pines and Kermes Oaks. There is also a smaller forest of Holm Oaks. The wildlife of Skopelos includes birds (eagles, vultures, buzzards), mammals (brown rats and hedgehogs), reptiles (lizards and snakes), and amphibians (frogs and toads).

The island of Skopelos is home to over 360 churches. Many of them are closed throughout the year, except for the feast day of who the church is dedicated to. Agios Athanasios is the oldest Christian church on the island. It was built in the 11th century in the Kastro area. There is only one church on Skopelos that does not observe the Greek Orthodox faith. This church hosts Jehovah’s Witnesses.

According to legend, the island of Skopelos was founded by Staphylos (or Staphylus), one of the sons of the god Dionysos and princess Ariadne of Crete. During the late Bronze Age, the island (then known as Peparethos) was colonized by Cretans. The Cretans would introduce winemaking to the island. The name Staphylos is Greek for “grape.”

In 1936, excavations in the Staphylos area would uncover a royal tomb from Mycenaen Greece. For a brief time, the island was under control of the city-state of Chalcis, Euboea since the 8th century BC.

Pirate Graves – Legend says that at this location in Sedoukia at Mount Karia, there are graves of pirates. There are ancient graves carved into the rocks. The graves are found above the Monastery of Saint Efstathios.
Monastery of Evangelistria – Located 3 km east of Skopelos Town on the slopes of the mountainside. This monastery was established in 1712. Surrounded by greenery, this monastery location gives a great view of the island.
Folklore Museum – House in an 18th century mansion in Skopelos Town. The mansion was donated by the Nikolaidis family. The museum features old furniture, ceramics, traditional costumes, and paintings.
Milia Beach – 13 km west of Skopelos Town. This sandy beach also features white pebbles and crystal water. Part of the beach is organized with umbrellas and sun beds.
Velanio Beach – 5 km from Skopelos Town. This small beach is partly organized. Velanio beach is secluded and nudism friendly.
Panormos Beach – 12 km west of Skopelos Town. A family friendly and partly organized beach. Panormos Beach is sandy with beautiful water and a great view of the sunset.
Monastery of Agia Varvara – Located close to Skopelos Town. This monastery is fortified. Beautiful frescos date from the 15th century.
Museum of Cultural Heritage – Located in Glosa. This museum and Library Perseus Athineos opened in 2008. The museum is housed in a stone house that was built in 1926 and aims to preserve and promote the cultural history of Skopelos.
Church of Agios Ioannis Kastri – Located in Agios Ioannis. The church is on top of a rock and provides views of the island. Scenes from the movie Mamma Mia were filmed here.
Agnondas Beach – 8 km south of Skopelos Town. Emerald waters, greenery surrounding the area, and fine sand with white pebbles make this beach breathtaking. Small fishing boats and yachts moor at the port.

BELOW ARE INTERESTING ARTICLES ABOUT SKOPELOS, GREECE: 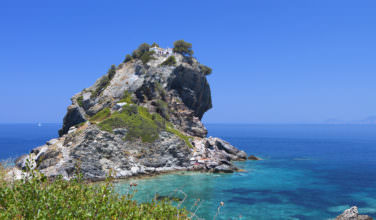 In a lot of ways, Skopelos is a typical Greek island. You can easily spend your days exploring the villages and historical sites and then settle in for a great... Read More 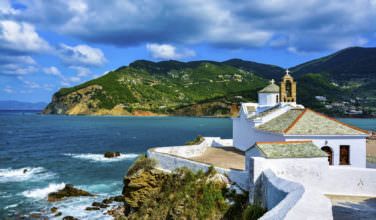 What to Do When You Visit Skopelos

Skopelos is one of those Greek islands where you feel you can truly escape. The island is covered in gorgeous pine forests, groves of olive trees, and grape vines. I... Read More 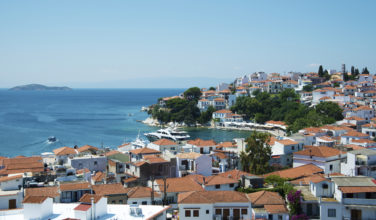 Museums to Visit in Skopelos, Greece

Each year, visitors flock to Greece to enjoy what the country has to offer. Greek island of Skopelos is just waiting to be explored. The natural beauty is enchanting... Read More 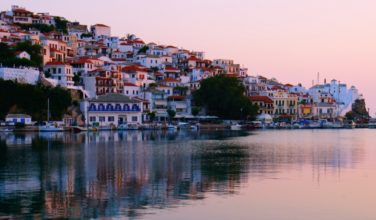 Monasteries to Visit in Skopelos, Greece

Known for being the most green island in the Aegean Sea, Skopelos is home to whitewashed houses, colorful courtyards, and winding alleys. The island of Skopelos, Gre... Read More

Each year, travelers are drawn from many locations to the majestic villages on the Greek island of Skopelos. The beautiful landscape of the island is due to its abun... Read More 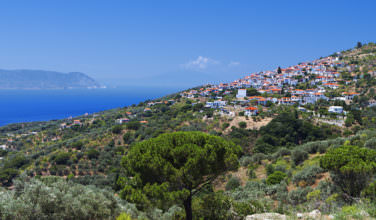 Visit Glossa on the Island of Skopelos Greece

Skopelos is a distinct Greek island that has a lot of charm. There are tall cliffs on one side of the island that are in perfect view of the sea... Read More 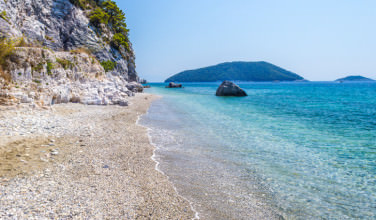 Reasons to Visit the Island of Skopelos Greece

Skopelos is one of those islands that have a rugged charm that has allured people for centuries. Part of the Northern Sporades group of islands, this island has a st... Read More