Written by GreekBoston.com in Ancient Greek History Comments Off on Draco – Lawgiver of Ancient Greece 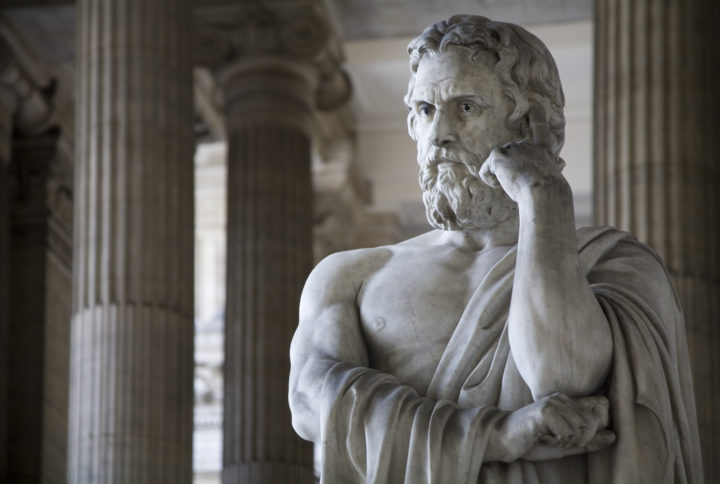 Born in 650 B.C., Drako, also spelled as Draco or Drakon, was the first Athenian legislator according to the dates on records we have found. His greatest contribution, the one which allows his name to carry on, would be the “Draconian Constitution,” or Draconian law. Prior to Drako’s constitution, laws were nothing more than oral and often involved blood feuding. While Drako was able to create legible, unwavering coes of law, his name has been synonymous with cruel and heartless legislation since the 19th Century.

Not much is known about the life of Drako. There is the possibility that he was of Attican nobility; records sync up that he was around during the same era. A dramatization of his death was performed in the Aeginetan theatre, having Drako crushed to death from all of the clothes thrown at him on the stage-it used to be clothing that the audience threw to performers, rather than roses like it is now. While we are unsure how he died, it is fact that he was chased out of Athens and lived out the rest of his days on Aegina.

These were the very first laws written out for everyone, posted on wooden pivoting tablets, called axones, that survived for nearly 200 years. Notable elements off the constitution include the following:

All laws were written down, rather than kept hidden away by a special social class.

After a considerably amount of debate, Athens revised its laws in 409 BCE. While the law on homicide is only in fragments, it mentions that the burden of prosecution falls upon the deceased’s relatives. The punishment for unintentional homicide was exile. It remains unclear whether Drako’s initial draft was intended for all homicides or just deliberate instances.

This was an oligarchic group established by Drako during the Peloponnesian War and tasked with keeping the peace. Plaintiffs could inform the Council of an injustice, cite the law that was broken and seek the dispensation of justice. It also handled the money used in repaying debts.

While the code bearing his name is infamous for its ruthlessness, Drako remains a notable figure in history for his codifying laws that any literate person could learn. The fact he drew a distinction between murder and homicide is also a major legal development.