Written by GreekBoston.com in Greek Mythology Comments Off on About the Rivalry Between Hercules and Hera 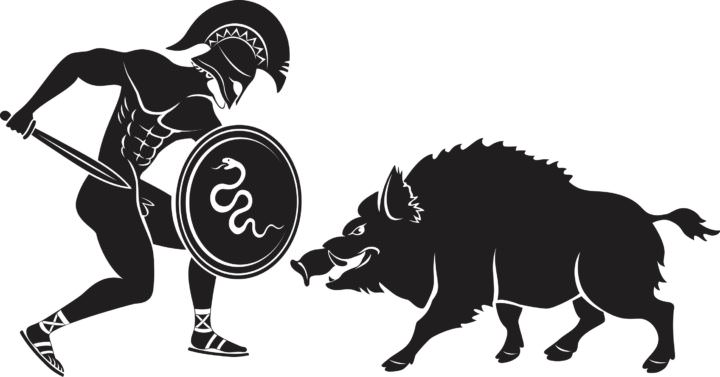 It is a well known fact that Hera, the queen of the gods and Zeus’s wife, was extremely jealous of not only Zeus’s consorts, but also of the children Zeus had with others. One of the individuals who was the target of Hera’s wrath was Hercules, also referred to as Herakles in Greek. As the stories go, Hera caused Hercules so much trouble that he was actually driven mad on one occasion. Here’s more information about the rivalry that took place between Hera, the queen of the gods and goddesses, and Hercules, one of the strongest men who ever lived:

Basically, Hera didn’t like him because she was the child of one of Zeus’s mistresses. As mentioned above, Hera often exacted her revenge against Zeus’s mistresses and sometimes even the children who were born from these unions. Hercules happened to be one of these children since his father was Zeus and his mother was mortal named Alcmene. She was described as a very beautiful woman, and when Zeus saw her, he knew he wanted to be with her. According to Homer, just before Hercules was born, Zeus announced a prophecy that would have made Hercules the ruler of the heavens in his place when the time came. Hera’s jealousy kicked in and he prevented Hercules from being born in time, which meant that the prophecy was fulfilled by another and not by Hercules. This story indicates that Hera made Hercules’ life difficult before he was even born!

As Hercules grew older, it was well understood that he had a remarkable amount of strength. To this day, that is the first thing that people remember about him. However, it is this very strength that Hera eventually caused Hercules to use against him. After Hercules was married and had a son, Hera caused him to go temporarily insane. He was confused and angry, and as a result of this, he killed both his wife and child. Part of his punishment is that the insanity was just temporary. When his sanity returned and he was fully aware of what he did, he was filled with regret. He traveled to Delphi in order to inquire how he could atone for the sin of killing his family.

After Hercules killed his family, the Oracle of Delphi told him that he could atone for the murder of his family by performing the legendary twelve labors. Each source that we know of that recounts this labor has a slightly different twist on it, though. In some versions of the story, he performed all twelve but only ten were recognized because of the fact that he received outside help. According to the work, Bibliotheca by Pseudo-Apollodorus, the twelve labors included slaying the Nemean Lion, killing a boar, and capturing the Cretan Bull. Once the labors were performed, he achieved atonement.

At the end, the struggle Hercules experienced between Hera and with his own mind led to immortalizing him. He became victorious in life regardless of what happened to him.