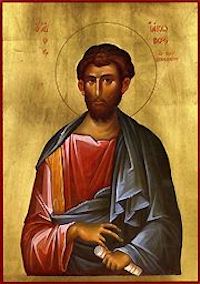 Saint James, also referred to as Apostles James or James, Son of Zebedee, is one of the Twelve Apostles, or the original twelve who followed Christ and were called to preach the good news. As is the case in the Orthodox Christian tradition, those who are named after this saint celebrate their name day as if it were their own birthdays. In fact, in countries like Greece, the big celebration of life takes place on an individual’s name day and not on the birthday. If the individual is named after Saint James, the feast day is celebrated on April 30 and again on June 30 of each year. Here’s more information about this saint:

James was born in Bethsaida, which was located in Judaea in the Holy Roman Empire. James was the brother of John, one of the other Apostles and the writer of the Gospel of John and the Book of Revelations. It is assumed that James was older than John. Both Apostles were sons of Zebedee, who was a fisherman by trade and was mentioned in the Bible a few times. The brothers, John and James, were fisherman just like their father until they left that life in order to follow Christ.

The moment when James began to follow Jesus is documented in the Bible. The story is documented in the New Testament. When Jesus saw John and James fishing, he told them, “Follow me, and I will make you fishers of men.” He became one of those who was with Christa for several key moments, such as the Transfiguration and in the Garden of Gesthemene while Christ was suffering on the cross.

The Apostle James is one of those who was eventually martyred. After Pentacost, James took his ministry to Spain where he preached about Christ. After he returned to Jerusalem, he proceeded to get into arguments with the Jewish people about who Christ was. Josias, who originally was considered a false witness, ultimately believed in Christ and he and James were sentenced to death together.

Today, there are some hymns that enable us to celebrate the life of Saint James during the Divine Liturgy. Here’s more information:

As a soldier of the Lord you were ranked among the choir of apostles.
Together with your brother, O James, you clung wholeheartedly to the Savior.
Armed with the power of the Spirit you preached him to all and were slain by the sword.
Therefore we sing your praises!

You were a chosen apostle of Christ
And the only brother of the beloved Theologian.
Most praised James, ask remission of sins and great mercy
For those who sing hymns to you.

You heard the voice of God calling you
And turned away from the love of your father.
With your brother you hastened after Christ, O glorious James.
With him, you were counted worthy to behold the Lord’s divine Transfiguration!

Saint Jame’s name day is celebrated on April 30 of each year. Visit the Name Day page for more information about other Orthodox Christian name days.