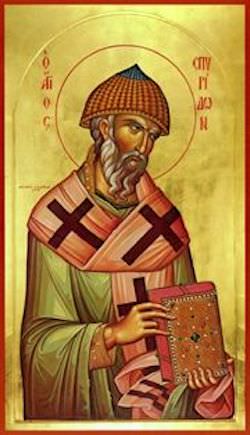 Saint Spyridon, also referred to as Spyridon of Trymithous or Spyridon the Wonderworker of Trymithous, is on of the saints in the Orthodox Church whose feast day is celebrated each year. He was born in Cyprus and although he spent most of his life on this island, he is strongly associated with the Greek island of Corfu where his remains can still be viewed today. People flock to the island from all over the world to catch a glimpse of his remains and to pray at the monastery where he will always be remembered.

During his life, he was known for his strong defense of the Christian faith. He was a bishop of the early church and was a participant at the Council of Nicaea. He was born in a village called Ashia on the island of Cyprus. He was a shepherd and he eventually married and had a child. His wife died and this left him and his daughter alone. Upon her death, they both entered into a monastic life together. Over time, he became a priest and eventually a bishop.

While at the Council of Nicaea, it is said that he met and formed a friendship with Saint Nicholas. He also defended the faith against Arianism and defended the Holy Trinity. He explained the trinity by holding up a brick and when he did so, the brick was said to have burst into flames.

There are some hymns that can be found in the Orthodox Christian church service that celebrate Saint Spyridon. Here are the details:

Wounded by the love of Christ, / all-holy one, your mind was given wings through the light of the Spirit, / you found work in active contemplation, God-pleasing Spyridon, / becoming a divine sacrifice, / and imploring divine illumination for all.