Did you know that the ceremonial uniform that the Greek Presidential Guard wears is closely tied to Greece’s history? To our modern eye, the uniform is vastly different than what typical soldiers wear today. For Greeks, this uniform represents all they’ve been through as a people, and 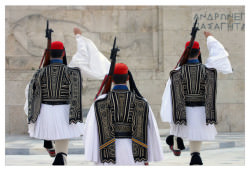 The term “evzone” can be traced back to Homer’s writings. He referred to the elite soldiers of his time as “Evzones” because they were “well-built” (“zoni” means “belt” in Greek). Not much is known about how they actually dressed in Homer’s time. However, the fact that he mentioned them shows that the Evzone soldiers have been part of Greek military tradition since Ancient Greece.

Today’s uniform most closely resembles the Klepht soldiers from the Greek War for Independence. According to Webster’s Dictionary a “klepht” is “a Greek belonging to any of several independence guerilla communities formed after the Turkish conquest of Greece.” For four hundred years, much of Greece endured Turkish occupation. However, they made the biggest impact during the war that eventually led to Greece’s independence. This struggle is honored in the foustanella, or kilt, which is pleated four hundred times – one pleat for each year of Turkish occupation.

Today’s Evzone uniform is a ceremonial one. Greek soldiers don’t wear it into combat. Their main function is to guard the Tomb of the Unknown Soldier in Athens and be part of any official parades. There are three uniforms that can be worn – the typical one that involves the pleated foustanella, the traditional uniform of the Cretan soldiers, which represents the Greek islands, and a Ponti uniform, which honors those Greeks who lived in the Pontic Region, which includes present day Turkey.

Elements of the Uniform

The Evzone uniform is fairly complicated and includes roughly several parts. Much of the uniform has it’s own symbolic meaning. Here’s a summary of the most symbolic parts of the uniform.

Other elements include the periskelis (breeches), the belt, garters (blue means they’re an officer), stivalia (boots), sabre, and a garter to hold the stockings up.

As you can see, this uniform is highly symbolic. For the Greek people, it embodies the people’s struggle for independence against the Turks and is a reminder of just how far the country has come since then.