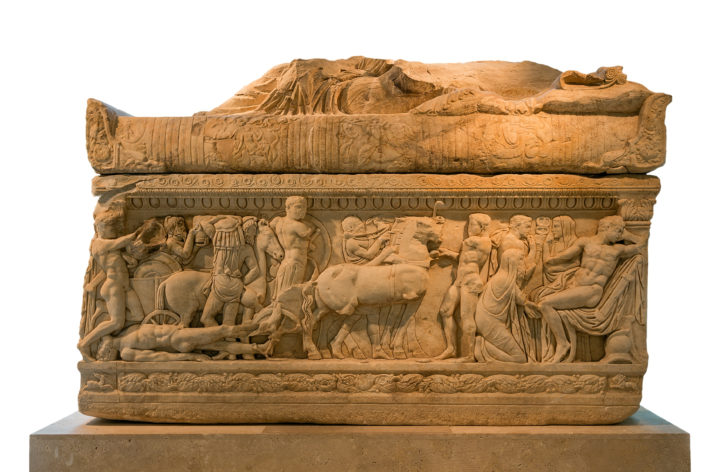 Greek mythology names Ixion as a king of the Lapiths, a group identified with Mount Pelion in the Greek region of Thessaly. Ixion is a minor character mentioned in Homer’s Iliad. However, he is still a character that is worth learning about. Here’s a lok at who Ixion was as well as the role he played in the Greek mythological stories:

In ancient Greek mythology, the Lapiths were the oldest tribe to inhabit Mount Pelion and the Peneus river valley. The tribe took its name from the hero Lapithes, who in some versions of the myth is the son of the Greek god Apollo. Lapithes had a twin brother, Centaurus, who was said to be the ancestor of the mythical race of centaurs, the half-human, half-horse creatures. In other versions of the myth, Ixion is the grandfather of the centaurs.

Differing stories describe the parentage of Ixion. He is variously reported to be the son of Antion and Perimele, Phlegyas, Leonteus, or Ares. Here’s a look at each of the theories:

Antion and Permele. Antion was said to be a descendant of Lapithes, making him the rightful heir to the throne of the Lapiths and also a descendant of Apollo. His mother Astyaguia was the granddaughter of the river god Peneus, for whom the Lapith’s valley home was named.

Perimele, the wife of Antion, was said to be a descendant of Amythaon, the founder of the ancient city of Iolcus.

Phlegyas. This legendary king of the Lapiths is said to be the son of the god Ares through a mortal woman named either Dotis or Chyrse. Phlegyas had a daughter named Coronis, who was loved by Apollo and became pregnant with the renowned Greek healer Asclepius. Coronis fell in love with another man, and jealous Apollo sent his twin sister Artemis to kill Coronis, although the baby in her womb was saved. Phlegyas, angry at his daughter’s death, burned a temple of Apollo.

The name of Phlegyas became synonymous in Greek culture with someone who defies the gods. Virgil’s Aeneid portrays him as being eternally tormented in the Underworld for this reason.

Leonteus. One ancient source names Leonteus as the father of Ixion. In Homer’s Iliad, Leonteus appears as a commander of the Lapiths, who fight on the side of the Greeks. Homer credits Leonteus with killing five enemies.

Ares. One of the twelve great gods of Mount Olympus, Ares is a god of war (along with his sister Athena, who oversees military strategy) and a son of Hera and Zeus. In the Iliad, Ares is portrayed as being on the losing side of the Trojan War, the side of the Trojans. When Ares is called the father of Ixion, it’s unclear who Ixion’s mother is said to be, and Ixion is not typically listed with Ares’ more well-known offspring.

Ixion married a woman named Dia, whose father was Deioneus (sometimes called Eioneus). Yet Ixion failed to pay Dia’s dowry, causing Deioneus to take some of Ixion’s horses as payment for the marriage of his daughter. Ixion retaliated by killing his father-in-law, burning him on a pyre of wood and hot coals. For this act, Ixion was shunned by society and driven mad.

Zeus, however, took pity on the outcast and invited the mortal to Mount Olympus. Here again, Ixion behaved madly, falling in lust with the queen of the gods, Hera. Zeus formed a cloud into the shape of Hera and Ixion, fooled into thinking the cloud was actually the goddess, fathered Centaurus with the nebulous faux-goddess. Centaurus later fathered the first centaur with a mare as its mother.

To punish Ixion for his outrageous behavior, Zeus placed Ixion on a burning, spinning wheel for all eternity. In various myths, the wheel is located in either the heavens or the Underworld. The myth of Orpheus and Eurydice says that the wheel stopped spinning only once, when Orpheus played his lyre