Written by GreekBoston.com in Greek Mythology Comments Off on All About Homer – Ancient Greek Poet 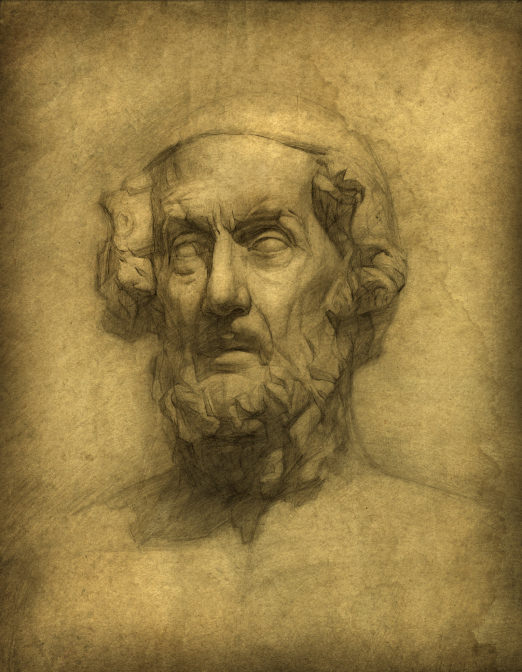 Homer is a Greek epic poet famously known for composing the Odyssey and the Iliad. Though he was alive thousands of years ago, his stories continue to entertain and impact us in our modern lives. He is credited for being the first epic poet in Ancient Greece.

Not much is known about Homer, particularly when he was born. Most believe that he was born sometime between the 850 B.C. and 1200 B.C. in Ionia in Asia Minor. The exact date isn’t known, but historians often guess based on his completed works. And, though exact proof of his authorship of the Iliad, Odyssey, and several other epic poems doesn’t exist, most experts agree that he was, in fact, the author.

His existence, however, is largely a mystery. Even though he is generally considered to be one man, it is possible that “Homer” is actually a group of multiple people. Any evidence either way, however, seems to have been lost.

Homer is most known for his epic poetry. This is a form of poetry that tells a whole story, or is a compilation of several stories at once. Bards who either sung or spoke the words while accompanying their tale with a stringed instrument traditionally performed them. These tales are often transcribed, which is a major reason why these works have survived.

Homer, who was also referred to as “The Blind Bard”, specialized in crafting stories out of the myths and legends of his time. These stories were meant to be sung and performed on a stage rather than read by us. His epic poetry contains literary elements that are meant to interact with the audience and engage them into the story. Modern audiences continue to be enthralled.

The Literary Works of Homer

Homer is most famously known for his epic poems but he wrote in other genres, as well. Besides writing the Iliad and the Odyssey, he also authored other epic poems and composed in a verse form known as Theben verse. Other works include the Homeric Hymns, Betrachomyomachia (a mini epic work known as “The Frog Mouse War”, and poems such as Phocais, and Capture of the Oechalia. By far, his most well known works are the Iliad and the Odyssey.

Much of what we know about Greek mythology has come from Homer’s two major works, the Iliad and the Odyssey. In them, most of the stories we know about the Greek gods and goddesses. Both stories were centered on The Trojan Wars. The Iliad took place during the war; the Odyssey took place just as the war concluded. If these stories had been lost, we wouldn’t know as much as we do about Greek mythology.

Even though Homer was alive thousands of years ago, his influence is still felt today. Much of his work is still required reading in schools and universities. However, reading his work derives much of what we know about him. His true identity is unclear. In fact, some people theorize that “Homer” could refer to more than one person. The only thing we know for certain is that his epic poetry is still embraced today.

Greek Mythological Story of How Oedipus Became the King of Thebes