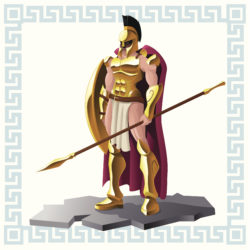 There are a lot of different gods and goddesses in Greek mythology that it can be hard to keep track. Some of them are more well known than others, but each has their place in the stories. Kratos is one of the lesser known of the gods, but he did have an important role. Since he isn’t mentioned often, there are also some conflicting stories out there about who he was and what he represented. For example, some list him as the god of war, others as the god of strength and power. In recent years, he has also become a popular video game character. Here’s more information about who Kratos is in Greek Mythology:

In some of the myths relating to Kratos, he is the son of two Titans: Styx and Pallas. In these myths, he is further a sibling of many other well-known characters from Greek mythology. This includes:

A common theme in this set of myths is Kratos’ relationship with Zeus. He is depicted as not only the god’s companion but also one of his chief enforcers. He is, in essence, the extension of the god’s will and his vengeance.

In other myths, though, Kratos is actually one of Zeus’ children. In these myths, Kratos is only a demigod, being that he is the byproduct of Zeus and a mortal woman.

Kratos is best known for his role in the story of Prometheus. In this story, Prometheus steals fire from the gods. As punishment for this, Zeus has Kratos and his sister Bia tie Prometheus to a rock, where he will be bound and tortured for all time.

In other mythical legends, Kratos usually only appears when others call upon him and his sister during times of battle. Dike, who is the god of justice, also calls upon Kratos from time to time.

Today, Kratos is better known for dramatic and artistic works based upon his legends than the legends themselves. In the 7th century BC, Greek Poet Hesiod wrote about him in his poem “Theogony.” But his fame is largely driven by a tragic play credited to Aeschylus called “Prometheus Bound,” in which Kratos is seen as the enforcement of justice.

In the late 18th century, a number of translations of “Prometheus Bound” brought Kratos into the consciousness of Western writers and artists. It became the subject of numerous works of art during the time, and, at the beginning of the 20th century, it was the subject of popular opera by Gabriel Fauré.

In the modern day, many people know Kratos through a video game franchise called Gods of War. Interestingly, the creators of the games based the Kratos character on the actual myth instead of how is portrayed in “Prometheus Bound.” Some classic scholars have even credited the game series for finally detaching Kratos from this one particular story and making him more than just a pawn of vengeance.

Although Kratos is a minor god in the Greek mythological stories, he has grown in popularity over the years. It is a good idea to learn at least a little bit about him!

What to Know About the Greco Turkish War