The Legend of the Minotaur

Home > Greek Culture > Greek Mythology > The Legend of the Minotaur

Written by GreekBoston.com in Greek Mythology Comments Off on The Legend of the Minotaur 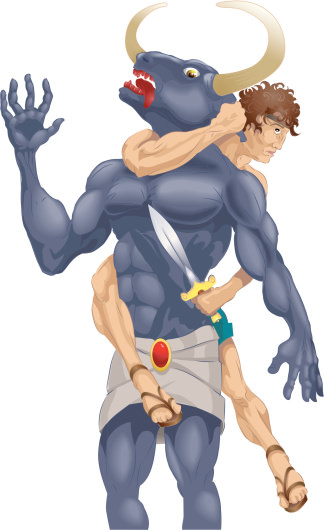 Greek mythology has creatures that extend well beyond the gods and goddesses and the Minotaur, which is half bull and half man, is one of these. In ancient mythology, it seems that there was only one Minotaur creature. However, as the stories developed over the centuries, it did evolve into an entire race of creatures. Here is an overview of how the Minotaur began.

King Minos and the Bull

The legend of the Minotaur really begins with King Minos, the Minoan King on the island of Crete. He wanted to prove that he was highly favored by all the Greek gods. So, he asked Poseidon to send him a bull from the sea. He would sacrifice the bull back to the gods in order to gain favor. When Minos saw how beautiful the bull was, he decided to keep it instead.

When Poseidon learned that Minos didn’t sacrifice the bull, he was upset. Though Poseidon is rumored to have a temper, he decided to get his vengeance without using force. He caused Pasiphae, the Queen of Crete and Minos’s wife, to fall in love with the bull.

Icarus, the man who flew too close to the son with his man-made wings, had a son named Deadalus. He is known as a skilled craftsman and his story is closely tied with the Minotaur’s. In fact, it is because of him that the first Minotaur was born.

Overtaken by lust, Pasiphae enlisted his help by having him construct a hollow cow so she could trick the bull. When the wooden sculpture was complete, she climbed inside. When the bull coupled with the “cow”, Pasiphae got pregnant. Asterius, the first Minotaur, was the child that resulted from Pasiphae’s lust for the bull. This is why Minotaurs are depicted as having the muscular body of a man and the head of a bull.

The Minotaur and the Labyrinth

When King Minos found out that Pasiphae bore a child from the bull, he was upset. Although it was his doing because he displeased Poseidon, he was still angry that his wife was unfaithful. So, he had Deadalus build the legendary Labyrinth. He banished Asterius to this complex maze, which is where he lived out his life.

Each year, seven young women and seven young men were sent into the maze as a sacrifice for the Minotaur. Basically, this was his only source of food. Eventually, Theseus made it to the end of the maze successfully and killed Asterius.

It is interesting to note that there has been evidence uncovered in the Minoan civilizations on Crete, particularly at Knossos, that suggests that bulls in general played an important role in the culture. For example, there is a fresco at Knossos that depicts a giant bull leaping. This motive also shows up in sculptures that have been uncovered from dig sites. In general, the tale of the first Minotaur, Asterius, shows that the Minoans both feared the creature and maybe also held it in high regard.