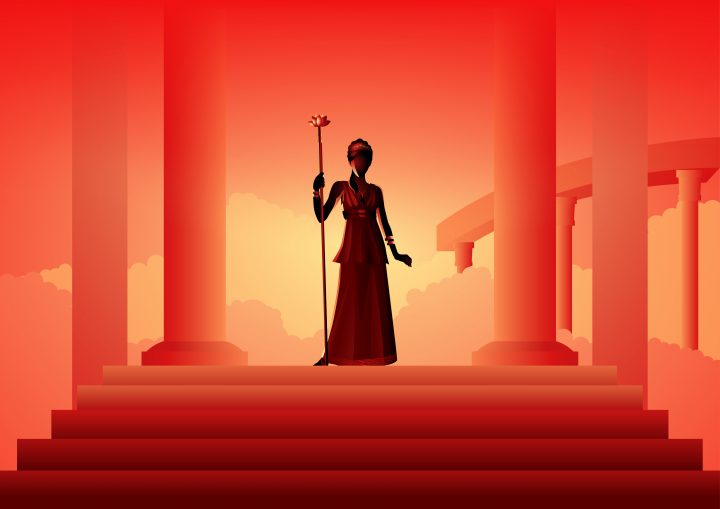 The same is true for the legend of Hercules, the famous hero and demigod, who is also the son of Zeus. There were other characters who were part of his legend. Here is some more information about the role Queen Omphale played in Greek Mythology, and also the role she played in the stories of Hercules:

Omphale was the daughter of Iardanus. Iardanus was a king of Lydia or a river-god. Omphale was married to Tmolus, who was an oak-clad mountain king of Lydia. It is said Tmolus was gored to death by a bull. After he died, it was Omphale who continued to rule over Lydia.

Omphale bought Heracles, also known as Hercules, as a slave for a significant amount of money. Heracles had become a slave after he killed Iphitus in a rage. Heracles then went to an oracle who told him that in order to repay Iphitus’ father, he must become a slave and hand over the fee.

It was embarrassing for Heracles to not only be a slave, but to be a slave to a woman. Heracles’ servitude to Omphale lasted about three years. During this time he would do minor labors, much as he did when he was a slave to Eurystheus. As part of his servitude to Omphale, Heracles would bury Icarus after he fell to death. He would also kill a deadly farmer named Lityerses, and deal with the Cercopes.

One of the more interesting stories about Heracles and Omphale is that they were written to have swapped clothes. This would have been another humiliation for Heracles as he was said to do his chores in women’s clothing. Omphale was also said to have offered to free Hercules so that she could marry him. His first wife was named Megara. After the wedding, Heracles was almost raped when Pan mistook him for Omphale.

Omphale would have two sons with Heracles, Agelaus and Tyrsenus. Tyrsenus is said to have invented the trumpet and he travelled to Italy where an area was named Tyrrhenia after him. There is a third son in this story by the name of Alcaeus, but it is not clear if Omphale is his mother or if his mother is a Lydian slave. Heracles left Omphale and Lydia, moving back to Greece where he would eventually marry again.

The legend of Hercules has endured, and he remains a popular figure throughout history. Movies have been made about him, and occasionally these stories also involve the famous queen. Since he is so popular, there are other characters that were also part of his tale.