Ruins of the Ancient City of Troy

For roughly 500 years, the Mycenaeans dominated Greece. Taking over from the Minoans, the Mycenaeans built cities, established trade with other settlements in the Mediterranean, and even conquered other civilizations to expand their empire. One of their last conquests was the famed City of Troy around 1250 B.C., yet their acquisition of the city didn’t last long. Roughly 50-60 years later around 1200 B.C., the Mycenaean empire crumbled.

The City of Troy is mostly remembered from Homer and his poems, The Iliad and The Odyssey. The myth of the Trojan War includes many individuals and reflects incidents that happened roughly between 1300 and 1200 BC – the last great century of the Mycenaean Empire. Moving beyond the myth and the story of Helen of Troy, archaeological evidence suggests that an ancient city of Troy did in fact exist. Evidence also suggests that the Trojans were a trade rival for the Mycenaeans due to the wealth of the Trojans and the geographic location of Troy.

Archeologists and historians believe that the area referred to as Troy was built on a low hill, roughly 5 miles from the coast of the Aegean Sea, in the northwest corner of what was Asia Minor, now modern-day Turkey. The cities location, just south of the Turkish strait called the Dardanelles, put the Trojans in a lot of power. Not only were they the gatekeepers of entering Asia Minor from the Aegean, but also the Dardanelles connected the Aegean to the Black Sea, which offered access to land that is now Europe and Russia. Having control of this city meant you were one of the biggest players in the area, and the Mycenaeans wanted just that.

Having crumpled the Hittite Empire (also in Asia Minor), the Mycenaeans aimed to take over Troy to completely control the Aegean Sea and expand north. While the story of the Trojan War is just that, a story, archeologists studying the Troy uncovered a lot of evidence that suggests the Mycenaeans did in fact take over the city. They found a Mycenaean cemetery outside of Troy featuring over 50 cremations and grave goods. Discovered Trojan pottery imitates the Mycenaean style suggesting that Troy and the Mycenaeans had known about each other for quite some time. Archeological clues in addition to the myth of Troy all tie together to strongly suggest that the Mycenaeans took over the Trojan city.

Perhaps the Mycenaeans became too big and couldn’t control their own empire. Internal strife and discourse are both cited as potential reasons for the fall of Mycenae. With the Mycenaean society overstretched, a group from the north came in and destroyed all of Mycenae, plunging Greece into what is known as the Dark Ages. 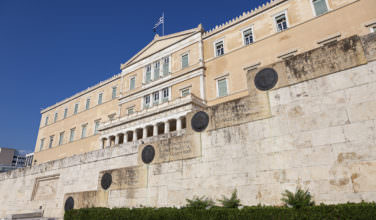