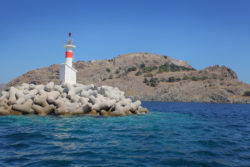 Within the rich cultural landscape of Greek Mythology lies the enigmatic story of the women of Lemnos. Encountered by the Argonauts, a troop of gallant warriors on a mission to fulfill an order from their king, these powerful women are discovered living in a dynamic world in which men no longer exist. Enraptured by the women, the Argonauts stay and create children with them before departing. More compelling than their self-created world, is the story of how the women of Lemnos became an island ruled and inhabited by women only. Here’s more information:

Curse of the Women of Lemnos

Aphrodite, the goddess who reigns over love and beauty, as well as passion and pleasure, becomes unhappy with the women of Lemnos. Aphrodite believes that the women have not paid her proper tribute. In retaliation, Aphrodite places a horrible curse on the women of Lemnos, which causes the Lemnian women to become repugnant to their husbands.

Revenge of the Women of Lemnos

The men of Lemnos soon discover the women from Thrace, a nearby country, and choose intimacy with them instead of their wives. Enraged, the women of Lemnos arise in fury one night and slaughter the men of Lemnos. King Thoas – secretly hidden on a ship by his daughter, Hypsipyle, is spared. He later arrives on the island of Taurica, having been carried there miraculously by a storm. With her betrayal unknown to the women of Lemnos, Hypsipyle is made queen and the women create a new world without men.

Arrival of the Argonauts

The Argonauts leave the Lemnian women when Hercules admonishes them for their dalliances with them. Later, after the Argonauts depart, Queen Hypsipyle’s secret rescue of her father, King Thoas, is realized and the Lemnian women try to kill her. Hysipyle manages to escape, but is captured by pirates and sold into slavery to King Lycus of Thebes.

Why the Women of Lemnos Are Intriguing

Fittingly, Hypsipyle’s son, Euneus, grows up to become the king of Lemnos. It is King Euneus who, at last, cleanses Lemnos from the awful deeds of the past by purifying the Lemnian land with the sacred fire from Apollos’ altar in Delos.