Written by GreekBoston.com in Greek Orthodox Religious Information Comments Off on History of the Hagia Sophia Church 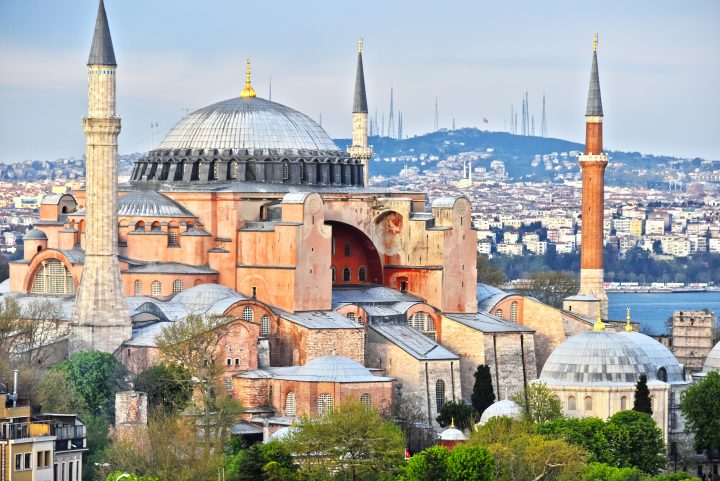 The Hagia Sophia stands tall against the Istanbul skyline. Its towering minarets, distinctive dome and intricate stonework make it one of the largest tourist attractions in the city. While it sits at the heart of a modern city, it might surprise you to learn that its history stretches back all the way to the Romans.

While today a mosque, the Hagia Sophia began its existence as the greatest Christian cathedral in all of Europe. Thousands of years of history would see it evolve and adapt to the circumstances of the ages, a process that continues to this day.

Stretching from Egypt in the south to Romania in the north, the Byzantine Empire, also called the Eastern Roman Empire, was the largest nation in Europe. Istanbul, then called Constantinople, was the empire’s grand capital. After the destruction of a much smaller church in the capital, Justinian the Great ordered the construction of the Hagia Sophia.

This towering monument would serve as the main cathedral of the Orthodox Christian faith for hundreds of years. A brief interlude after the Fourth Crusade saw the building become a Catholic church. During this period, Christian frescoes, depicting Mary, Peter and other saints, would come to adorn the walls of the Byzantine cathedral.

In 1453, the Ottoman Empire, a Muslim power united by the House of Osman, besieged Constantinople. They quickly overwhelmed the defenders. During the sacking of the city, Sultan Mehmed II forbade his men from looting the holy cathedral. Not long afterward, he converted the Hagia Sophia into a mosque.

After the conversion, the Ottomans added four minarets to the mosque’s perimeter, one of its more distinctive features today. Among many other additions, the Sultans built ritual fountains for ablution, mausoleums to house their dead and mihrabs to point towards Mecca.

During the reign of the Sultans, which lasted for nearly five hundred years, there were many restorations of the mosque’s ancient architecture. Most notably, because of a grand renovation in 1847, professional Swiss-Italian architects restored the structural integrity of the building and its many columns.

The Ottoman Empire fell in the wake of World War I. Modern Turkey began at that moment. Mustafa Kemal Atatürk, the founding father of modern Turkey, was a fierce advocate of secularism. He envisioned a Turkish republic free of the Islamism that had dominated the Ottoman state.

To that end, the secularization of the Hagia Sophia would serve as a demonstration to the world of Turkey’s new path forward. In 1935, workers unveiled the old Christian frescoes from the Byzantine period. The minarets fell empty, and none shouted the call to prayer. The Hagia Sophia became a museum.

That state of affairs persisted for some time. Despite widespread popular support among Turkey’s largely Muslim population, attempts to reverse the secularization of the Hagia Sophia were all but unheard of until the rise of Recep Tayyip Erdoğan and his Islamist movement.

At that point, a decree from the Council of State reversed Atatürk’s old order. The Hagia Sophia was once more a mosque. Once again, the building’s halls filled with worshipers from around the world, a state of affairs that continues to this day.