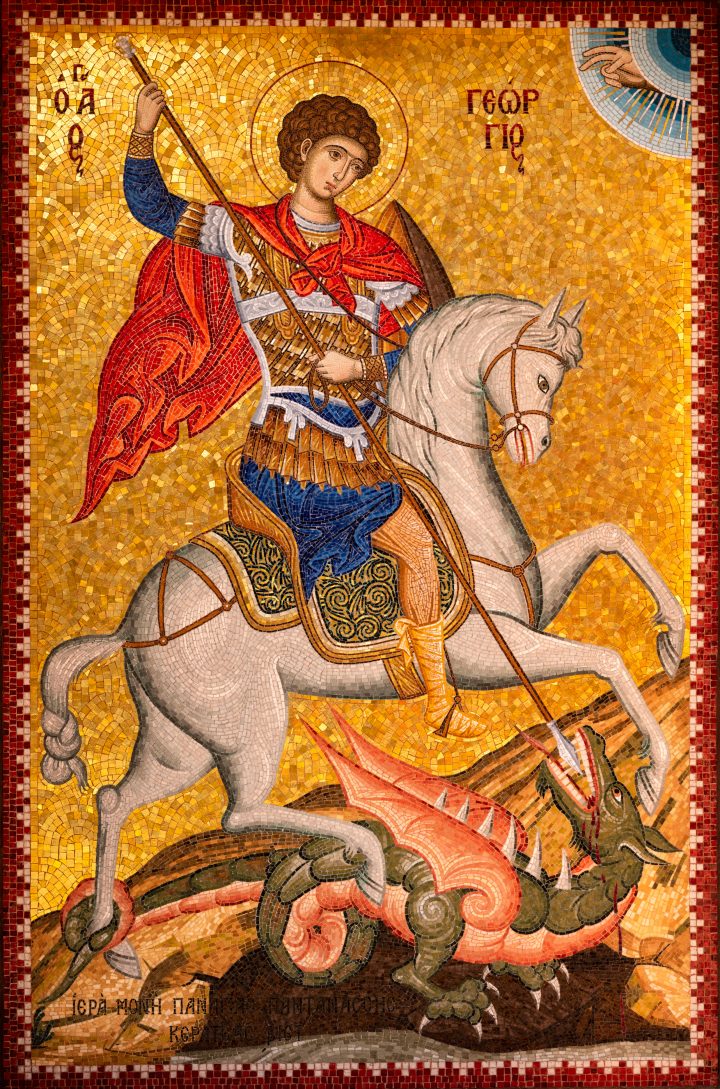 In the history of Christianity, few figures inspire as much reverence as Saint George. The patron saint of several localities, including England and Georgia, Saint George is the epitome of knightly virtue and chivalry. Throughout history, stories persist of the life of Saint George, including his service as a Roman soldier and his slaying of a fearsome dragon. Following his martyrdom in 303, Saint George became recognized as a holy saint in the Orthodox Christian Church. Here is more information about him:

Life and Martyrdom of Saint George

Traditional stories of the life of Saint George tell that he was born in Cappadocia, Turkey. George’s father was also a Christian Roman soldier who was martyred for his faith. Fleeing the persecution of the Romans, George’s mother brought him up in her home city of Lydda, Palestine. As a youth, George was taught the value of piety by his faithful mother, who also ensured that her son received a first-rate education.

When George came of age, he chose to serve in the Roman army like his father. A brave warrior with a charming personality, George quickly endeared himself to his superiors and rose through the ranks of the Roman officer corps. In 303, George found himself in Nicomedia in the personal guard of the Emperor Diocletian.

When Diocletian ordered the persecution of Christians in Nicomedia, George refused to participate and revealed his faith. The emperor then brutally tortured the noble soldier before having him decapitated near the city wall. George’s suffering led thousands of citizens in Nicomedia to convert to Christianity, including Empress Alexandra.

Saint George’s Battle with the Dragon

It is in this moment that Saint George arrives on the scene. Hearing of the plight of the city, George asks for the help of the Holy Trinity and slays the dragon with his lance, Ascalon. To thank George, the king of Silene offers him hordes of treasure, which George gives to the poor. Seeing his heroic piety, the people of the city convert to Christianity.

As previously stated, many major churches revere Saint George for his piety and dedication to Christianity. Churches throughout the world bear Saint George as their patron, with particularly strong veneration in England and the Levant. Iconography of Saint George usually follow two themes. In early icons of the saint, George is depicted in the uniform of a Roman soldier. Later depictions, especially frescoes completed at the time of the Crusades, show Saint George carrying Ascalon on a white horse in preparation for his battle with the dragon. Saint George’s emblem, a red cross emblazoned on a white field, is also a common heraldry symbol.

Here are the hymns that are sung on Saint George’s feast day to honor him:

You were bound for good deeds, O martyr of Christ: George;
by faith you conquered the torturer’s godlessness.
You were offered as a sacrifice pleasing to God;
thus you received the crown of victory.
Through your intercessions, forgiveness of sins is granted to all.

God raised you as his own gardener, O George,
for you have gathered for yourself the sheaves of virtue.
Having sown in tears, you now reap with joy;
you shed your blood in combat and won Christ as your crown.
Through your intercessions, forgiveness of sins is granted to all.

In closing, the story of Saint George is one of the most famous tales of the early Christian Church. Saint George’s example has led to his veneration in several churches and has even inspired nations to adopt his heraldry symbols. In the end, the saint’s example is a potent reminder of the virtues of piety and chivalry.