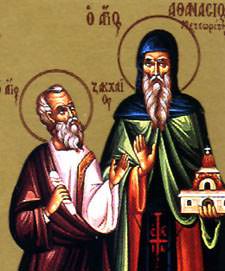 Studying about the apostles and saints is a big part of our lives as Orthodox Christians. Not only do we learn about their lives, but we are often named after them. In Orthodox countries like Greece, the name day is celebrated and honored even more than people’s birthdays! Here’s a look at one of those saints, Zacchaeus, whose name day is on April 20th of each year:

It is unknown exactly when Saint Zacchaeus was born, but we do know that he was alive during the 1st Century A.D. He is known mostly for being a “rich publican” in Jericho. At the time, the publicans were people who collected taxes in Ancient Rome, and they had a reputation for being fairly corrupt (even though not all of them were). He became a follower of Christ, and he is mentioned in the Bible has having climbed a sycamore tree in order to catch a glimpse of Him. After the Ascension, he traveled with Saint Peter. It is also said that he passed away peacefully.

The Orthodox Church remembers Saint Zacchaeus and sets aside a special day know as the Sunday of Zacchaeus. During this Divine Liturgy, the Bible reading focuses on a passage where Zacchaeus is said to have encountered Jesus on the road. Here’s the passage from  Luke 19:1-10 (NIV):

19 Jesus entered Jericho and was passing through. 2 A man was there by the name of Zacchaeus; he was a chief tax collector and was wealthy. 3 He wanted to see who Jesus was, but because he was short he could not see over the crowd.4 So he ran ahead and climbed a sycamore-fig tree to see him, since Jesus was coming that way.

5 When Jesus reached the spot, he looked up and said to him, “Zacchaeus, come down immediately. I must stay at your house today.” 6 So he came down at once and welcomed him gladly.

7 All the people saw this and began to mutter, “He has gone to be the guest of a sinner.”

8 But Zacchaeus stood up and said to the Lord, “Look, Lord! Here and now I give half of my possessions to the poor, and if I have cheated anybody out of anything,I will pay back four times the amount.”

9 Jesus said to him, “Today salvation has come to this house, because this man, too, is a son of Abraham. 10 For the Son of Man came to seek and to save the lost.”

Hymn of the Seventy

It is true that all of the original Twelve Apostles have their own hymns, but most of the Seventy don’t. There is, however, a hymn devoted to the Seventy as a whole. Here it is:

Holy apostles of the Seventy,
entreat the merciful God
to grant our souls forgiveness of transgressions.

O faithful, let us praise with hymns
the choir of the seventy disciples of Christ.
They have taught us all to worship the undivided Trinity,
for they are divine lamps of the Faith.

Saint Zacchaeus name day is on April 20th of each year.  Visit the  Name Day page for more information about other Orthodox Christian name days. 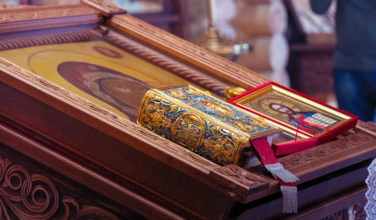 Is it Okay to Stream a Greek Orthodox Church Service Online?