Written by GreekBoston.com in Ancient Greek History Comments Off on Get to Know Admiral Conon from Ancient Greece 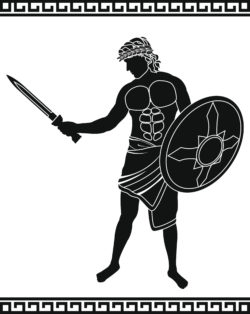 During the Peloponnesian War, there were many individuals who contributed to the overall success of the war. One of the more prominent figures, however, was an Admiral by the name of Conon. His initial lack of success in the war allowed him to later assist Athens in their political and military restoration. Here’s a look at the contributions he made to the Ancient Greek military:

During the Peloponnesian War

At the start of the Peloponnesian War, Admiral Conon was responsible for a naval group, sent in to follow the recall of the Alcibiades troops. Throughout the course of the battle, the naval unit found themselves unable to draw out their enemies. When they realized those efforts were fruitless, they took a stand on a nearby open beach, Aegospotami. Supposedly, the soldiers were warned in advance that this location was ill-advised. However, sources suggest that the warning was given limited consideration. Instead, the soldiers may have laughed at the warning.

This lead to Admiral Conon’s defeat, as Lysander had sent scouts to watch the Athenians. When the crew took a meal break, they signaled the Peloponnesian armies, who caught the soldiers mostly unaware. The men who were with Conon were all taken as captives of war and later killed. Of all the ships that had set off with the naval forces, only nine escaped – eight of them fled to the island of Evagoras, as they feared the repercussions of their actions on the shores.

Admiral Conon was later given much credit for reviving Athens and helped restore it to its previous glory. After he suffered his defeat, Conon and the remainder of his army traveled next to Caria, and, after having been trapped and simultaneously rescued, the men then traveled to Rhodes, which is where Admiral Conon lay claim to most of his fame.

The island had overturned the wishes of the Spartan supporters and had once again returned to a form of democracy. Utilizing this information, Conon was able to successfully capture food and supplies. Outraged, the Spartans sent their navy after Conon and his fleets. However, as the Spartan navy was lead by an inexperienced individual, they were defeated easily, with the battle lasting a short amount of time.

When he had successfully defeated the Spartans, Conon deemed it safe to return to Athens and was aided in his return by the Athenian government. Shortly after these events, the Spartans decided to attempt to negotiate with Athens, advising they would return land previously taken from them. Conon was among one of the delegates sent to advise the Spartan army that this would be unacceptable.

As a form of retaliation, the Spartan’s jailed the delegates and this included Admiral Conon. However, this stand allowed Athens to continue to restore their empire to its previous glory, and his time served in prison proved that Conon was a true many of his country. His son later became yet another prominent Athenian general, based on his insight.