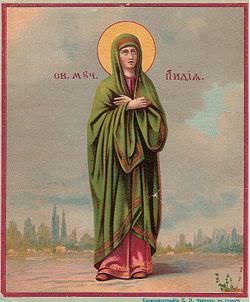 In addition to learning all about the Bible and the life and works of Jesus Christ, Orthodox Christians also enjoy learning about the lives of the saints. It is also a common practice for those who are Greek Orthodox to be named after one of these saints. When they are named after them, they celebrate their name days on the feast days for these saints.

Saint Lydia is one of those saints that has meant a lot to the early days of the Christian Church and she is celebrated as such. Her feast day is on March 23rd of each year and those who are named after her will celebrate on this day. Here’s more information about her:

Saint Lydia, also referred to as Lydia the Martyr or The holy and glorious Martyr Lydia, is most known for having given up her life for her beliefs. She was also known as being the husband of Philetus, a man who was an official in the Holy Roman Empire. Although the Romans would eventually accept Christianity, at the time when Lydia and Philetus were alive, this wasn’t the case. They were both practicing Christians and they also raised their children in the Faith.

Not only were the members of the family Christians, but they also openly practiced their faith and didn’t hide in secret like many did at the time. They lived in Rome from the years 117 AD to 138 AD during the rule of the Emperor Hadrian, who was known for being highly against Christianity. They openly confessed their faith in public despite that.

The family was first questioned about their beliefs in 121 AD and during this round of interrogations, they didn’t hide their faith. They declared it. Hadrian’s response is that he sent the family away to Illyria where they were expected to be tortured. When they got there, Amphilochius, the governor, tortured them and had them suspended from trees in order to show everyone what happens to Christians. After that, they were jailed and were expecting to receive martyrdom.

However, that isn’t exactly what happened. While in jail, and angel came to them in the night to give them comfort. Despite that, they still expected to be martyred the next day. Their persecutors warmed a caldron of oil so they could burn to death. When the family was placed in the oil, however, the opposite happened. The oil cooled and the family escaped the situation unharmed.

When Amphilochius saw what happened, he immediately became a Christian and spared the family’s lives. Not only that, but he also threw himself in the caldron of oil and he was also unharmed. However, although they escaped martyrdom on this day, they were eventually martyred.

Saint Lydia’s name day is on March 23rd of each year. Check the Name Day page for more information about other Orthodox Christian name days.