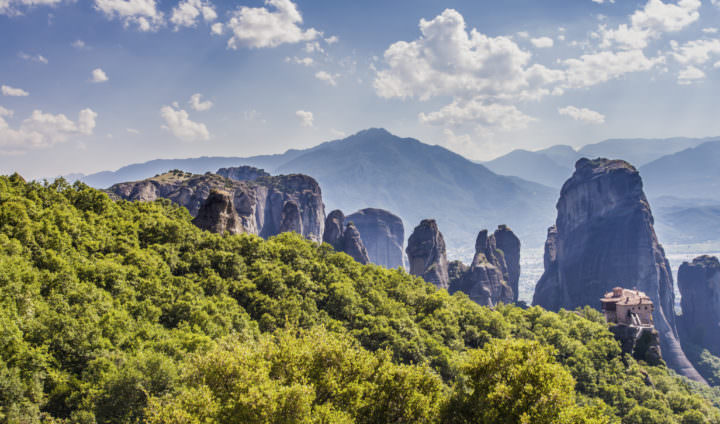 At its largest, Thessaly, one of the regions of ancient Greece, covered the area between Mount Olympus and the Spercheios Valley. The region consists of a number of geographical features, including mountains and rivers, but is mostly made up of broad plains. These plains were used by the ancient Thessalians to farm grains and to breed horses.

Between 6000 BC-2500 BC Thessaly, which at the time was referred to in antiquity as Aeolia, was inhabited by several different Neolithic and Chalcolithic tribes as well as Mycenaeans. The Greek Thessalians were said to be descendants of a Thesprotian tribe which settled in the area after leaving the Thesprotian Ephyra. The Thessalians traced their lineage to a number of Greek Mythological figures including Heracles, Achilles, and Jason. They also believed their land was at one point inhabited by Mythological peoples such as Phlegyans, Myrmidons, and Lapiths.

The first Thessalians invaded the western portion of the area and drove out the original inhabitants. Soon they expanded over other parts of the region, gaining control of the most fertile land and forcing the local peoples to live under a Thessalian rule.

System of Government in Thessaly

The inhabitants of what was now Thessaly lived in a three-tiered class system. The lowest class, the Penestae, consisted of slaves and other unfree laborers, mostly people who had been captured during battles and people who opposed the Thessalian rule. The middle class consisted of the inhabitants of the lands that the Thessalians had conquered. These people paid tribute to the Thessalians and lived as free people, though they had no access to government positions. The third and highest class were the original Thessalians. They controlled all matters of government and essentially owned the laborers of the Penestae class.

Thessaly was controlled for a time by a number of Heracleidae kings who usually came from members of the aristocratic families in the area. It was one of these kings, Aleuas, who first divided the region into districts. Aleuas split the land into four areas – Phthiotis, Plistiaeotis, Thessaliotis, and Pelasgiotis. Historians debate the reason that these districts were created, but most agree that each district acted as a sort of self-ruling city-state. Occasionally, a supreme leader of the districts was elected. This official presided over the affairs of all the districts.

The Decline of Thessaly

In 480 BC Thessaly was invaded by the Persians during the Second Persian Invasion of Greece. Thessaly surrendered to the Persians, and while officially under Persian rule, the Thessalian people remained under control of the existing aristocratic families. During the conquest of Alexander the Great the military power of the Thessalians joined the Macedonian Army and took part in the war being waged by Alexander. After the First Macedonian War, in 197 BC, the governing body of Thessaly dissolved and the region was incorporated into Macedonia.

Through their rise and fall, the Thessalians controlled one of the most sought-after areas in ancient Greece. They are remembered for their contributions to governing as well as their additions to the already rich tradition of Greek mythology.