Written by GreekBoston.com in Ancient Greek History Comments Off on Diodorus Siculus – Historian of Ancient Greece 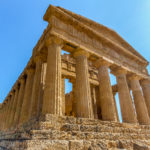 Diodorus Siculus is not, perhaps, one of the most commonly known names from Ancient Greece, but the work he did was incredibly important. He was a historian, and he was devoted to collecting knowledge and documenting stories. His works have given scholars an important view into what life was like in the ancient world, particularly in Ancient Greece. Here is more information about him:

Although Siculus’s works are well-known, much about the man himself is a mystery. No one is quite sure when or where Siculus was born. It is known, however, that he lived during the same time as figures such as Julius Caesar, between 100 and 44 BC. The last date he mentions in any of his works is 21 BC. In addition, Siculus himself wrote that he was born in Agyrium, which is now called Agira, in Sicily. During that time, Sicily was a part of Ancient Greece. There is also a tombstone in Agyrium that reads “Diodorus.”

Diodorus is known for his massive historical text, Bibliotheca Historica. Originally, the Bibliothecaconsisted of 40 books. To complete these books, Siculus took information from a variety of sources, including using the works of other well-known and important historians.

The first book laid out Siculus’s plan for the rest of the books. The first six books then explored mythic history, focusing on the Hellenic and non-Hellenic tribes, and continued to the fall of Troy. History and culture of ancient civilizations, including those of Mesopotamia, North Africa, India, and Ancient Egypt, were also included. Books seven through 17 followed history from the Trojan War to Alexander the Great’s death. Books 18 through 40 recounted history up until either 60 BC or the start of the Gallic Wars. The ending has been lost, so it is unclear just how far Siculus was able to take his writing.

Unfortunately, of the 40 original books, only books one through five and 11 through 20 still survive, although small excerpts of some of the books were used by other historians, so fragments do remain. However, although historians and scholars have only a small amount of the original material to study, Siculus’s accounts give a crucial glimpse into the times. For example, in the third book, Siculus describes the slave labor in the gold mines of Nubia. This book is one of the earliest surviving texts on the subject and offers valuable information.

In addition to the incredibly valuable historical facts that Siculus’s Bibliotheca Historica provides, the work is important for another reason. Siculus used works from many historians of his time or earlier. Many of the original works from these writers have also been lost, but thanks to Siculus, we have excerpts from them and a good idea of what they were about and how those historians felt about their time.

Diodorus Siculus may not be a familiar name, but his work was incredibly important. Through it, he provided modern scholars with important details about a time long past, a view into cultures since lost, and a glimpse of works that would otherwise have been lost.