Written by GreekBoston.com in Ancient Greek History Comments Off on Plato – Metaphysic Philosopher of Ancient Greece 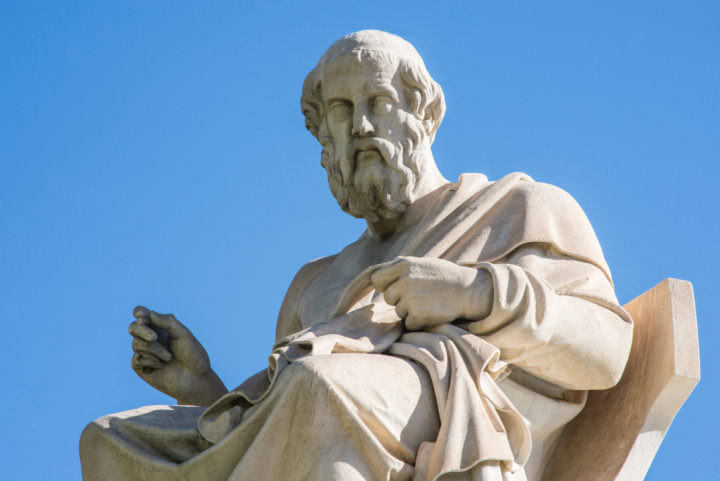 One of the things that the Ancient Greeks were known for is that they thought a lot about how to explain the world in which they lived. This led many to pursue their questions in an academic setting, and many of these people developed their own philosophies and taught them to their students. As a result of this innate curiosity, there were a lot of philosophers in Ancient Greece. However, some were more famous than others. Plato is one of the most well-known of all the Ancient Greek philosophers. Here is a look at who Plato was as well as his philosophies:

There is a slight debate as to when Plato was born. Some sources say it was in 428/427 B.C. and other say in 424/423 B.C. The same is true for his death. Sources estimate that he was about eighty years old when he died, and the date of his passing is estimated to be around 348 or 347 B.C., depending on when he was actually born. He was always associated with the city-state of Athens and it was here that he was born and also where he died. Much of what he accomplished in his life took place in Athens. However, it is thought that he traveled to various places, such as Sicily, Egypt, and Cyrene sometime over the course of his life.

Besides his unique philosophies and way of thinking, he left a lasting legacy in Athens by creating the Academy of Athens so that others could receive an education based on his philosophies and the philosophies of others. It was here that Plato taught while he was alive and his followers continued after is passing. He created this school after he returned to Athens when he was done his travels. The Academy is actually the first organized school recorded in history and it remained open long after his death. In fact, it was still educating students up until the 5th Century A.D., when it was closed because the Emperor Justinian I of Byzantium because it was looked at as a threat to Christianity.

One of the problems historians are faced with is that it can be difficult learning about some of the historical figures in Ancient Greece. The reason for this is that records are often lost, and this makes it extremely difficult to piece things together. However, this isn’t the case for Plato. It is thought that most of his works have been completely preserved, which means that we know a lot about who he was and what his philosophies are.

He is often described as a metaphysical philosopher because he was concerned with the “fundamental nature of reality,” according to Webster’s Dictionary. At the time, this way of thinking was called “Platonism” but it is now referred to as metaphysics since many philosophers since him have embraced this line of thinking.

Plato is one of the most well known of all the Ancient Greek philosophers. He left his legacy by founding the Academy of Athens, and other philosophers through the ages have been influenced by his thinking.