Written by GreekBoston.com in Ancient Greek History Comments Off on Solon – The Forefather of Athenian Democracy 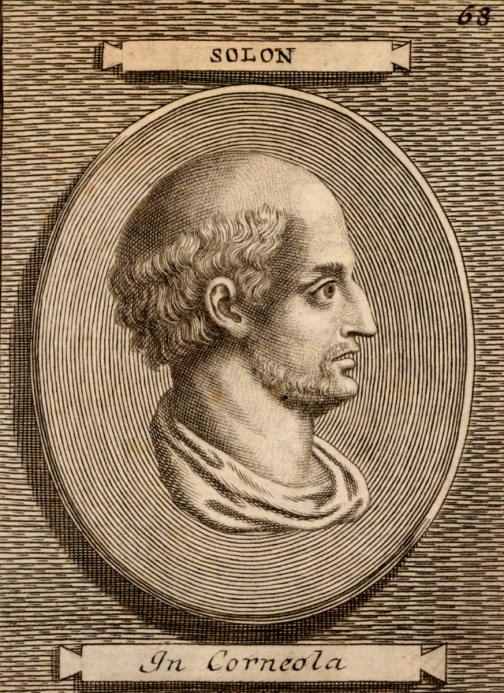 They city-state of Athens was at a crossroads circa 600 BC. A major act of tyranny was averted when the archons stopped Cylon’s attempt to take over the government in 640 BC. Twenty years later, Draco introduces new (albeit extremely harsh) legislation to attempt to reform both the Athenian government and its people. Both of these events represented different extremes of living, and the Athenian people were left needing some fair and equal guidance. They got their answer with a man named Solon.

Solon was born around 638 BC, growing up just as all of these major changes were happening in Athenian society. He came from a fairly noble family with roots tracing back to Codrus, the last King of Athens and other major players in Greek history including Plato. His family was distinguished as being of a noble clan, but unlike the other aristocrats, Solon’s family only held moderate wealth. As a result, Solon began working in trade and commerce and became very successful.

Solon was born on the Salamis Island, just 10 miles from Athens. Around 595 BC, the city-states of Megara and Athens began fighting over ownership of the island. Solon was appointed the leader of the Athenian troops (most likely due to his noble status and commercial successes). An avid poet, Solon wrote a poem about the island, which helped to raise morale and increase solidarity among the Athenian troops. His positive leadership helped Athens defeat Megara. Even when Megara refused to concede ownership, the case was taken to the Spartans and the Spartans awarded ownership of the island to Athens.

Having achieved success and notoriety from the successful accession of Salamis Island to Athens, Solon was soon asked to be the archon (chief magistrate). His appointment marked a turning point in the history of the Athens city-state. There were tensions between the economic classes, rivalries among the aristocrats, and a lack of moral ethics that spread beyond the boundaries of the Athens region. Solon would soon introduce sweeping reforms and legislation to stabilize both the Athenian economy and the morale of the people.

Breaking the Cycle of Poverty

Under the current Athenian law, any debtor who was unable to repay his creditor would have to surrender their land to the creditor. The arrangement essentially made these people serfs. They were forced to work for their creditors and a percentage of whatever was amassed on the peasants’ land was to be given back to the creditor. If crops were unable to grow, the serfs become further indebted to their creditors and were forced into a life of working for the upper class without amassing any personal gains of their own. Or, they were forced to abandon the land completely.

One of Solon’s most notable reforms is what the Greeks referred to as seisachtheia (sometimes spelled seisakhtheia), which translated to “the relief of burdens.” The legislation would help to eliminate all outstanding debts and completely shift not only the economics of Athens but also the sharing of power among the classes.