Written by GreekBoston.com in Ancient Greek History Comments Off on Do You Know that the Greeks Invented Theater? 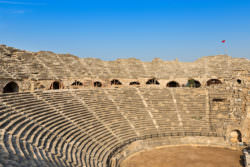 Most of us can’t even imagine a world without the theater and its offshoot, the cinema. Watching a play, musical, or movie is one of our main forms of entertainment, and the choices for enjoying all of these things are vast. However, it wasn’t always this way. Without the Ancient Greeks, theater as we know it may not even in existence since the Ancient Greeks are credited with its invention. Here’s more information:

There are those, such as various historians and also Aristotle, the Ancient Greek philosopher, who believe that theater has its roots in the Ancient Greek religion. People would gather to witness the “performance” of various religious ceremonies where the spectators didn’t play an active part in what was taking place, they merely watched. It is here that many believe the idea of the theater blossomed. Since witnessing religious ceremonies was a normal part of their worship, it appears as if the progression into formalized theater was fairly natural. In fact, Greek mythology regularly made its way into the plays that were written.

Most historians trace the formal development of theater to the city-state of Athens. In fact, the word “theater” has its roots in an Ancient Greek word. It is largely thought that the Ancient Athenians had a flair for drama that extended into things like religious ceremonies, weddings, funerals, and more. Over time, people began creating plays that were to be performed at theaters. They were written down so that the performance could be repeated over and over again. Theater is also looked at as a form of oral storytelling. Many of the stories that were handed down through the generations were eventually dramatized so that a larger number of people could enjoy them at once.

Most historians agree that the official beginning of theater as we understand it today occurred at a religious festival in Athens called the Great Dionysia that took place every year. The Theater of Dionysius, which is located near the Acropolis and is still standing today, was at the core of this festival. The entire event was dedicated to the god of wine, Dionysius, and at the core of the festivities was a theatrical event where playwrights would hold performances of their masterpieces.

The Ancient Greeks not only invented theater itself, but they also created multiple genres, including the comedy, tragedy, and the satire genres. Each of these entertained audiences at first in Athens, and then the practice spread throughout Greece. These plays were performed in the ancient theaters that were at first built in Athens, and then the other ancient city-states began building them, as well.

It is true that the Ancient Greeks invented the theater as we know it today. In fact, many of the plays that were written back then have not only survived, but are still being performed today, such as Oedipus Rex, Medea, and Prometheus Bound.