Home > Greek Culture > Modern Greek History > The History of the…

Written by GreekBoston.com in About Athens, Greece, Modern Greek History 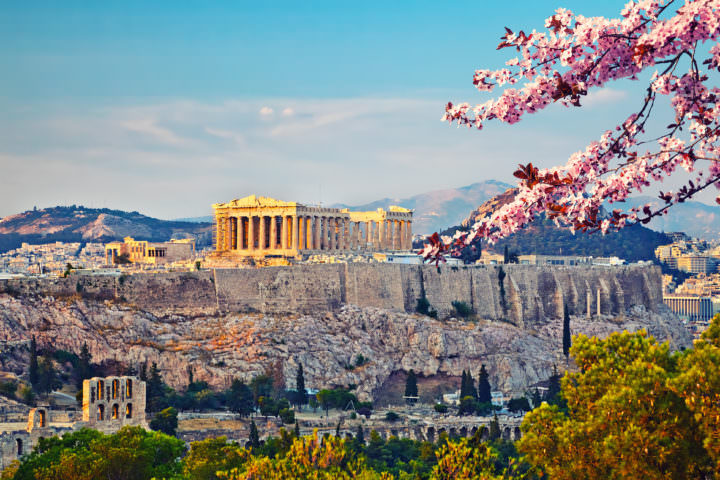 The Parthenon was built over 2500 years ago, and it has been part of the Athenian skylines ever since. Standing atop a limestone rock almost 500 feet tall is the Acropolis of Athens [Ακρόπολη Αθηνών, or just Ακρόπολη]. The city of Athens has come to be defined by its ancient Acropolis, as well as the ancient buildings it holds on top of it.

In fact, the Parthenon is more than just an old building to visit while in Athens. It was a temple originally dedicated to the goddess Athena. Here’s an overview of this temple’s history:

Origins of the Parthenon

The building we know and see today is actually a replacement for the so-called “Older or Pre-Parthenon” that was destroyed along with the rest of the Acropolis’ buildings by the invading Persians in 480 BC. The legendary Athenian statesman, general, and orator Pericles launched an ambitious and absolutely massive rebuilding campaign of Athens, the one that gave us the buildings still standing on the Acropolis today.

Construction of the Parthenon

Construction of the Parthenon started in 447 BC and was completed some 15 years later in 432 BC—which makes the Parthenon nearly 2,500 years old. But don’t let its incredible age fool you; the temple was on the cutting edge of technology and design. Its architects were Ictinus and Callicrates, while t

The Parthenon is a temple in the classical Greek Doric style, meaning that its columns have simple capitals, fluted [deep grooves] column shafts, and no bases. There are eight of these columns on either end of the building and seventeen columns running along its sides. As is the case with many other Greek temples, the columns are not actually a single solid piece of marble, rather they are made by stacking massively carved column drums one on top of another aligned perfectly. This is executed so well on the Parthenon that in many cases you cannot even see the space between two separate column drums.

Visual Beauty of the Parthenon

The Ancient Greeks worked hard to create a visually appealing aesthetic with the Parthenon. For example, a long flat line in a building (like the floor of the Parthenon) appears to bow outward or sag when viewed from afar, which meant its columns would also be distorted. To prevent this, the leveled steps that the columns rest on [the stylobate] actually curve up in the center. The stylobate on the front and back of the building is actually over 2” taller in the center than on the ends, and on the sides it is over 4” higher in the center.

To further emphasize this, the columns actually lean inwards, away from the outside viewer. It is actually calculated that if you could draw a straight line from the center of each column up over a mile into the sky, the columns would actually come together and touch one another. Each column is not the same diameter throughout thanks to an effect called entasis, where the middle of each column slightly bulges outward, to accentuate the load that it is carrying above it.

If that weren’t enough the corner columns are actually thicker than the rest to make sure they actually appear the same size as all of the others. The corner columns also happen to be spaced closer to one another than the other columns are. All of this is of course rather surprising for a building that at first glance looks like a collection of straight lines and 90° angles, but then again that just might be exactly what its builders had intended.