Written by GreekBoston.com in Greek Mythology Comments Off on Hephaestus – The God of Fire 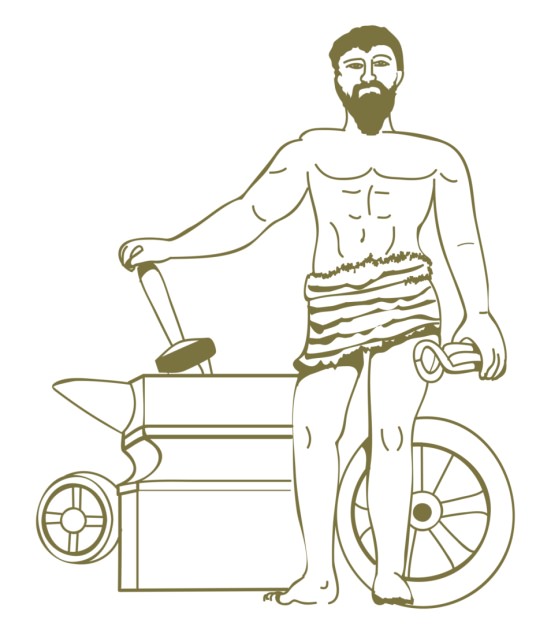 When most of us think of the Greek gods and goddesses, we imagine bold personalities who have memorable stories attached to their name. Some Olympic gods and goddesses, however, aren’t as memorable. Hephaestus, the god of fire, is one of these. He was worshiped in the industrial centers of Ancient Greece, such as Lemnos.

It’s not that he wasn’t important to the culture. As the god of fire and the son of Zeus and Hera, he did play a crucial role in Greek mythology. However, he was portrayed as quiet and often meek in most of the stories in which was mentioned. This is in contrast to the personality of Aphrodite, his bolder wife who was the goddess of love and beauty.

Hephaestus’ problems began right after he was born. It is said that Hera was unhappy with how he looked. In fact, he repulsed her. As a result, she tried to cast him away. As a result, he fell from the heavens to the ocean because he had a “shriveled foot”. Thetis, Achilles’ mother, rescued him.

After his exile, he actually returned to Mount Olympus with the help of Dionysius, who got him drunk. After they both drank wine, Hephaestus couldn’t stand on his own so Dionysius loaded him on the back of a mule and returned him to Mount Olympus. This scene is celebrated on ancient pottery recovered in both Attica and Corinth.

Blacksmith of the Gods

As the god of fire, Hephaestus was able to work fire into a thriving trade. He became a blacksmith and among his talents was forging metal into weapons. Though he was looked at as a representative of all crafts workers, he is most known for his work at the forge.

His skills as a blacksmith were so revered that he created many of the weapons the other gods and goddesses used. His most famous creations included the shield that Achilles used and the helmet Hermes wore. He is most famously depicted at the forge, wielding his anvil and hammer.

Though he was well respected as a blacksmith, his personal life was in shambles. Zeus recognized that Aphrodite’s beauty could cause trouble between the other gods. As a way to try to moderate her sensual tendencies, he gave Hephaestus to her in marriage. Men and goddesses alike lusted after her and as a result, Hephaestus was often portrayed as a laughingstock.

Because of Aphrodite’s most famous dalliance, Hephaestus and Ares did not get along. On one occasion, Hephaestus trapped Ares and Aphrodite within an invisible net, as they were being intimate. After they were trapped, he revealed their indiscretion to others. They were mortified and as a result, this intensified the hatred between Hephaestus and Ares. Aphrodite and Hephaestus could barely tolerate each other after the incident.

Hephaestus was the subject of much ridicule because of his personal problems. Not only that, but his wife’s indiscretions caused tension between him and other gods, such as Ares. However, he was a well-respected and important blacksmith and he forged many of the weapons the gods and goddesses used, such as Achilles’ shield.