Written by GreekBoston.com in Greek Mythology Comments Off on Hermes – The Greek Messenger God 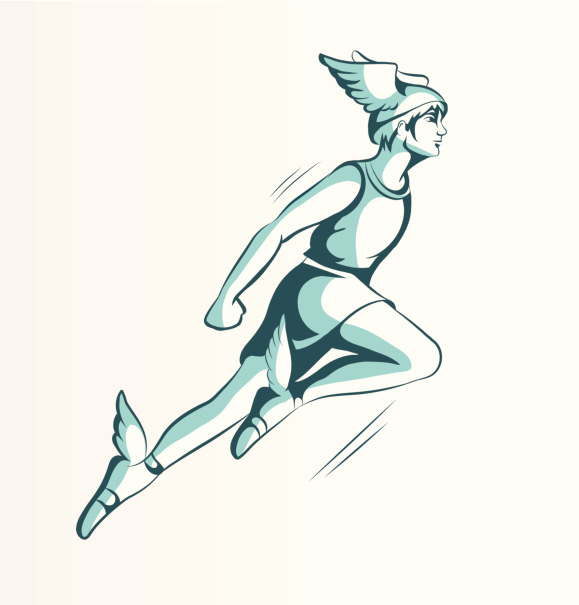 Hermes is the Messenger God and the son of Zeus and Maia, who was the the daughter of Atlas. He is most often depicted wearing a winged helmet it and Hephaestus, the Blacksmith of the Gods, is said to have made this helmet especially for him. He is also one of the younger Olympic gods and was depicted as having a likable, even lovable personality. Hermes also had various lovers and fathered a lot of children.

One of Hermes’ most famous temple sites is on Mount Cyllene, the place of his legendary birth. His youthfulness also made him the patron god of the gyms and his likeness is displayed in ancient exercise rooms. Also, he is most commonly associated with the palm tree, turtle, rooster, and goat which all point to his most popular stories.

Birth and Childhood of Hermes

Maia was the oldest daughter of Atlas and her beauty was legendary. As soon as Zeus saw her, he knew he had to be with her. He would sneak out at night when Hera was asleep so that he could be with her. Before long, Maia became pregnant with Hermes, who was born in a cave on Mount Cyllene in Southern Greece.

According to legend, Hermes started to grow rapidly. Within hours of his birth, shortly after the nymph Cyllene who lived on the mountain nursed him, he snuck out of the cave in search of adventure. He then made a lyre out of sheepskins and quickly taught himself how to play. After traveling the world in less than a day and pulling several pranks, he went home. However, his mother knew what he did and warned him that his behavior may, one day, displease the gods.

During his first day in the world, Hermes showed an exceptional intelligent and cunning mind. He didn’t heed his mother’s advice, however. He continued to organize pranks and he even became a thief. This displeased Zeus, his father and the King of the Gods. He eventually reprimanded Hermes, who promised he would stop as long as Zeus made him the Messenger and Herald of the Gods.

Zeus did comply, but Hermes never really lost his innate personality. As a result of this, stories describe Hermes as not only the Messenger and Herald to the Gods, but also the god of thieves and other unsavory characters.

The Love Life of Hermes

Despite his innately cunning and thieving nature, Hermes was lovable. As a result, mortals, demi-goddesses, and goddesses all desired him. He had many lovers (but no wife) and many of these lovers bore his children.

Yes, Hermes was a likable god. He is also seen as a cunning trickster. Though he changed after Zeus made him the Messenger God, he never could completely abandon his inherent nature.