Mount Olympus is a formidable mountain that looms over the Greek countryside. As the tallest mountain in Greece, it has played a big role in Greece’s history. Not only is it a popular destination for tourists and hikers from around the world, but it is also the subject of much legend. 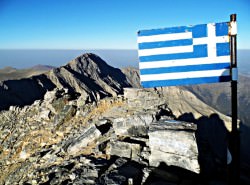 In fact, it is so often mentioned in the myths of the Greek gods and goddesses, it is easy to forget that it’s a real place. Also, no mortals were allowed on the mythical Mount Olympus. Here is an overview of the role Mount Olympus played in Greek mythology.

After Zeus and the other Olympian gods defeated the Titans, they made their home on Mount Olympus. More specifically, they built their home on one of the peaks. After viewing the mountain, it makes sense that the Ancient Greeks made this the home of the gods and goddesses. Mount Olympus is a fairly isolated place and since it does appear to loom over the countryside, this made it an ideal place for overseeing the world where the mortals dwelled.

Home of the Gods and Goddesses

In most of the stories where Mount Olympus is mentioned, Zeus and the other Olympians lived in palaces within the gorges that are prevalent on the mountain. It is here where the lives of the gods and goddesses fell into a rhythm similar to he way mortals lived.

They slept, ate, socialized, and ruled from the mountaintop. Some stories indicate that each of the gods and goddesses had their own palaces. Other accounts indicate that they all lived in a central palace. The following is an overview of the most commonly accepted structure to Mount Olympus.

Though they did rule from the mountaintop for a long time, Typhon, a god who was also portrayed as a monster, tested their status. Typhon was a giant who wanted to control Mount Olympus. Most of the gods and goddesses fled, except Athena who stayed to fight. Though the Olympians were eventually successful, the war did weaken them somewhat.

When looking at Mount Olympus today, it is almost hard to imagine it living up to its mythological reputation. In the stories, we see it as an inaccessible, distant mountain where only gods were allowed to dwell. In reality, it is the site of the first official national park of Greece and a popular hiking destination for people from all over the world. However, the mountain is fairly difficult to climb which can add an aura of mystery in its own right.