Written by GreekBoston.com in Greek Mythology Comments Off on About Telamachus – Son of the Hero Odysseus 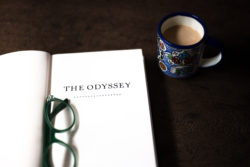 The story of Telemachus may be embedded in the story of Odysseus, his hero father’s, but the Ithican prince is an intriguing character in his own right. Odysseus is a central character in both the Iliad and the Odyssey, ancient Greek epic poems about the Trojan War and Odysseus’s long journey home from the same war, respectively. Telemachus plays a key role in reinstating his father. From interacting with gods and heroes to his own internal journey, Telemachus’s adventures bring him from callow youth to bold adulthood.

Get to Know the Young Prince

Telemachus was an infant when his father left for the Trojan War. As the war drags on, Odysseus is presumed dead, and the boy can only dream of his father. Meanwhile, suitors move into the castle, pestering the queen for her hand in marriage and draining her resources. Telemachus can only watch. His mother Penelope’s cunning keeps the suitors at bay for a while, but eventually, the men discover her schemes and demand that she choose one of them to be her husband and king. By this time, the ten-year Trojan War has long since ended, and unknown to his son and wife, Odysseus has struggled almost another decade to reach home. One of the goddesses herself intervenes and sets Telemachus on the road to find his father and his own courage and resourcefulness.

His Journey and a Goddess in Disguise

Athena, the goddess of wisdom, knows that Poseidon schemes to prevent Odysseus’s return, and she sets about giving the young Telemachus a push in the right direction. After he converses with Athena in disguise, Telemachus recognizes that his newfound courage and direction is a result of meeting with a god or goddess, and he finally goes in search of Odysseus. Athena, disguised as a man named Mentor, helps Telemachus in his travels to Pylos and Sparta, where he receives word of his father from fellow war heroes. Finally, he returns home to discover his father is hiding in a disguise of his own.

Reunited at last, Telemachus proves to be an able ally in reinstating his father to the throne. He ensures the safety of his mother and her women, then, along with his father and a few humble supporters, drives out and kills the suitors in a bloody, brutal fight. Penelope finally accepts that her husband has returned, and the royal family is restored. Ithica receives its long-lost king. Telemachus is now an active agent, his confidence in his father and in the help of Athena proven true. He has found the courage and skill to be an able leader himself one day.

Telemachus’s story may be the first written “coming of age” story in Western literature. The boy changes from powerless youth to a cunning, bold leader. He is also part of an epic, a story of intervention both supernatural and bloody, of family and authority restored. Aided by the goddess of wisdom, Telemachus proves he has come into his own hard-fought, princely role.