When it comes to the Orthodox Church, the saints are an important part of not only the church itself, but to the people. It is a regular practice to be named after one of the saints, and those who are celebrate their name days on the saint’s feast day.  Saint Herodian was one of these saints. As one of the Seventy Apostles he was part of the early days of the Christian Church. His feast days are on April 8th and November 10th of each year and he is also celebrated on January 4th with the rest of the Seventy. Here’s more information about Saint Herodian:

Saint Herodian, also referred to as Apostle Herodian or The holy, glorious, all-laudable Apostle Herodian, is  considered to be one of the Seventy Apostles. Although we don’t know exactly when he was born, we do know that he was alive when Christ was. The Seventy Apostles, along with the Twelve Apostles, were commissioned to preach the news about Christ to the rest of the world. In doing so, they spread Christianity and established the early church.

We do know that Herodian was a close relative of the Apostle Paul and he began following Christ early on. We also know that he was persecuted for his beliefs. He was beaten and left for dead by Jews who disagreed with his teaching. He was present with both the Apostles Paul and Peter and assisted them in their ministries. Eventually, he was martyred and was beheaded with Olympas, one of the other of the Seventy Apostles.

There are some hymns that can be found in the Orthodox Christian church service that celebrate Saint Herodian. Since he has two feast days, there are two sets of hymns that related to him.  Here are the details of the lyrics, which have been translated from Greek to English.

Illumined by divine light, O holy apostles,
you wisely destroyed the works of idolatry.
When you caught all the pagans you brought them to the Master
and taught them to glorify the Trinity.

Let us praise in hymns the six–fold choir of Apostles:
Herodion and Agabus,
Rufus, Asyncritus, Phlegon and holy Hermes.
They ever entreat the Trinity for our souls!

You became the disciples of Christ
And all-holy Apostles,
O glorious Herodion, Agabus and Rufus,
Asyncritus, Phlegon and Hermes.
Ever entreat the Lord
To grant forgiveness of transgressions
To us who sing your praises.

Like stars, O holy Apostles,
You illumine the way of the faithful with the light of the Holy Spirit.
You dispel the darkness of error as you gaze on God the Word!

Saint Herodian’s name days are on April 8th and November 10th of each year. Check the Name Day page for more information about other Orthodox Christian name days. 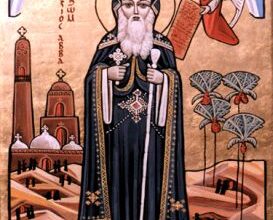