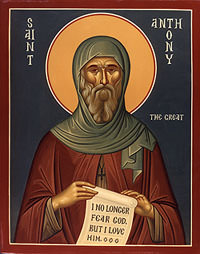 Saint Anthony, also known as Anthony the Great, Anthony of Egypt, and Anthony of the Dessert, is one of those saints who was alive in the early days of the church. His feast day is on January 17th of each year. Here’s more information who Saint Anthony was and how he contributed to the life of the church:

Saint Anthony was born in 251 AD in Egypt and was the son of two devout Christians. His parents were also noblemen in Egypt. They raised Anthony as a Christian as well, but unfortunately they passed away when Anthony was very young. After his parents died, he completely devoted his life to the church. Eventually, he sold all of his possessions and become a monk. In fact, he was even referred to as the Father of Monks.

Besides being a monk, he didn’t have any official titles. However, he was a passionate defender of the faith, especially against Arianism, which was a popular heresy at the time. Saint Anthony constantly defended the faith against Arianism and regular spoke out against it, especially at the Synod of Nicaea.

Here’s a little taste of what he said in order to defend the faith:

“One should not say that it is impossible to reach a virtuous life; but one should say that it is not easy. Nor do those who have reached it find it easy to maintain. Those who are devout and whose intellect enjoys the love of God participate in the life of virtue; the ordinary intellect, however, is worldly and wavering, producing both good and evil thoughts, because it is changeful by nature and directed towards material things. But the intellect that enjoys the love of God punishes the evil which arises spontaneously because of man’s laziness.”

The Greek Orthodox Church has some hymns that celebrate Saint Anthony. These hymns are usually sung on this saint’s feast day, which takes place on January 17th. Here’s more information about the hymns that are typicially chanted:

O Father Anthony, you imitated the zealous Elijah.
You followed the straight paths of the Baptist and became a desert dweller.
By prayer you confirmed the universe.
Wherefore, intercede with Christ our God to save our souls.

Forsaking the uproars of life O venerable one,
you completed your life in quiet, fully imitating the Baptist.
Therefore, we honor you with him, O Anthony, Father of Fathers.