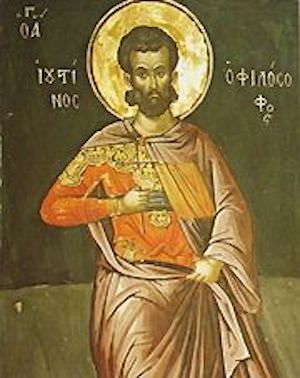 It’s so true that learning about the saints is a big part of being an Orthodox Christian. Celebrating the lives of the saints is also a regular part of the church calendar. Called feast days, these special days honor and commemorate the Orthodox Saints. Those who are named after the saints celebrate their name day on the saint’s feast day.

Saint Justin is one of the saints that is a regular part of the church calendar. His feast day is on June 1st of each year. Here’s more information about him:

Saint Justin, also referred to as Justin the Philosopher and Martyr, is one of the saints who was alive during the early days of the Orthodox Church. He was born in 103 AD in Neopolis of Palestine. He was alive during a time when Christians were actively persecuted. As it turns out, this is something that would ultimately happen to him after he converted to Christianity.

Besides being a philosopher, Justin was also martyred. He lost his life when he was beheaded. His persecution was headed up by Crescens, a philosopher who was jealous of him from the Cynic line of thinking. Justin was persecuted for his beliefs and eventually died in 167 AD.

Saint Justin’s feast day is held on June 1st of each year. Here are the hymns that are sung on this day, as they have been translated into English:

Apolytikion of Martyr Justin the Philosopher – Plagal of the First Tone

Thou didst empty the cup of the wisdom of the Greeks, and thou didst thirst yet again, till thou camest unto the well where thou foundest water springing to eternal life. And having drunk deeply thereof, thou didst also drink the cup that Christ gave to His disciples. Wherefore, O Justin, we praise thee as a philosopher and Martyr of Christ.

As the breath of Paradise, the dew descending from Aermon, Christ the Power and the Peace and Wisdom of God the Father, came upon thy thirsting spirit, O Martyr Justin, making thee a spring of knowledge for all the faithful, when thou barest with true valour death as a martyr, to live for ever in Christ.

Saint Justin is one of the early saints of the Orthodox Church. His feast day is on June 1st of each year. He was both a philosopher and a Christian.  Check the Name Day page for more information about other Orthodox Christian name days.

Justin the Philosopher and Martyr – Also Source for Image Above