If you visit Crete today, you have the option of visiting the Palace of Knossos to learn more about the island’s Minoan past. The Palace of Knossos is in north central Crete just south of Heraklion, largest city on the island. Humans first occupied the site sometime around 7000 B.C. in the 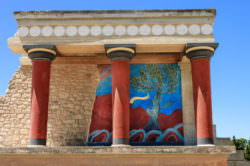 Neolithic period. Knossos was probably the first and oldest Neolithic site on Crete.

Here is some more information about this ancient wonder of the Palace of Knossos on the island of Crete:

Though there is some debate as to when the construction of this early palace existed, they have pinpointed it to the Middle Minoan period. By the end of this period, the palace covered an area of almost ten thousand square meters and continued for about five hundred years. This signified the transition of Minoan Crete from a clan-based into a hierarchical society with an urban elite.

The construction of a monumental building around a central court at Knossos was a long project, which took place over several generations. The West Façade with an upper floor with windows facing the West Court dates from the First Palace period.

Also dating from this period were the raised walkways in the West Court, and the kouloures, three large circular pits in the West Court for use yet undetermined. The Royal Road from the Minoan town at the northwest built by some central authority was an indicator of the progress of Minoan society, which also featured drainage systems. There is evidence of workshops in and around the palace for their various trades, such as weaving.

The people made changes to the palace during the Middle Minoan time period. This corresponded with the destruction of other Minoan palaces on Crete. These changes happened over a long period of time. For example, a writing script from Phaistos replaced the hieroglyphics that the people used at the time.

A massive earthquake hit Knossos at the end of the Third Middle Minoan Period. Much of the west part of the Palace collapsed. Then another earthquake struck, and more demolition and rebuilding followed during the Late Minoan Period. The palace visible today dates from then.

During the Neopalatial era, the filled-in kouloures enlarged the floor of the West Court. A major entry route into the palace, the Corridor of the Procession, went to the south of the West Facade through the South Propylaeum. Stairs led to the first floor of the West Wing and the Throne Room also dates from the Middle Minoan Period. Though, the form of the room now extant dates from a later period.

Around 1450 BC there was widespread destruction throughout Crete. All other palaces were destroyed, but the Palace at Knossos, although damaged, escaped the total destruction of the others. But ashlar masonry went out of use, replaced by gypsum, and architectural changes to the Palace used inferior materials.

An important development during this later period was the arrival at Knossos of Linear B script, which linguists have deciphered and now recognize as an early form of the ancient Greek language spoken by mainland Mycenaeans.

As you can see, the Palace of Knossos has been through a lot. Though fire and earthquakes ravaged the palace, it is intact enough to give us an idea of what life was like in Minoan Crete. 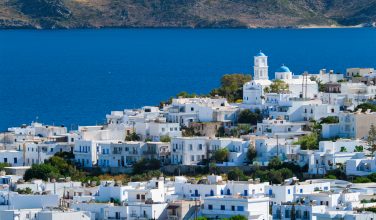 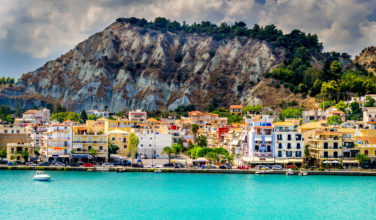 Visit the Vrysakia Aqueduct on Zakynthos 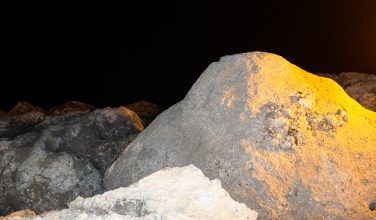 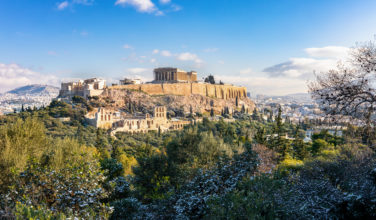 Visit the Tower of the Winds in Athens