Home > Greek Cooking > Most Common Types of Fish in Greece

Written by GreekBoston.com in Greek Cooking Comments Off on Most Common Types of Fish in Greece 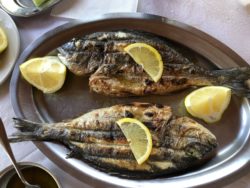 Fish is an important part of the traditional Greek diet and if you spend any length of time there, it’s easy to see why. Because there are so many islands in Greece and there is such a long coastline on the mainland, fish is an easy and accessible source of sustenance. Greeks make their living fishing on a large scale and on a smaller scale, they’re more than happy to fish for just enough to feed their families.

When eating Greek cuisine in places outside of Greece, however, cooks have had to make adjustments based on what’s available in the local area. That’s why the fish dishes in Greece are definitely worth a try. Even though many of these fishes are available all over the world, they seem to taste the best while in Greece.

For instance, sardines are widely available throughout the world, but eating them in a can is somehow not the same. Before you order, however, you should know that Greeks usually leave the heads on because the head is a good indicator of how fresh the fish is. Here’s a list of some of the most common fish that you will find throughout Greece: 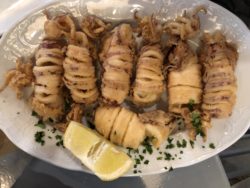 Canned sardines that most of us are familiar with are most certainly inferior to the fresh sardines that are found in Greece. Typically a small fish, where they lack size they make up for in flavor. This fish is extremely plentiful throughout the Aegean Sea and that makes it easily affordable. The time to fish for sardines is in the summer, which means that they find their way in menus throughout peak tourist season. Greek cooks often bake or fry the freshly caught sardines.

Here are some recipes that include sardines:

Most of the anchovies we are exposed to are canned in a lot of salt. They have a pungent, salty flavor, and many people have an aversion to their flavor. Don’t let that stop you from eating the fresh anchovies that are found throughout Greece! They’re extremely mild, and they make an excellent addition to any Greek meal. They’re especially delicious fried or marinated and drizzled with fresh olive oil and lemon juice.

Here are some recipes that use anchovies:

In other parts of the world, mackerel is used as a bait fish, which makes it difficult to find mackerel to actually cook with 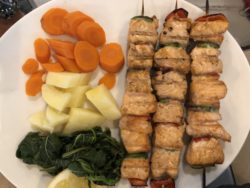 . The opposite is true in Greece and it is often treated as the main star of the meal. The Mackerel in the Aegean Sea is plump and flavorful and tastes especially delicious when rubbed with olive oil and sprinkled with salt and pepper and then grilled. Once the fish is cooked, it is placed on a platter whole, drizzled with olive oil and lemon juice, and served with the rest of your meal.

Smelts are similar in flavor to sardines and they are just as plentiful in the waters of the Aegean Sea. This fish tastes best when fried whole and served extra crispy. They are often coated with a thin batter or just a dusting of flour before frying and are usually served with a sprinkling of sea salt and a drizzle of lemon. However, the lemon is usually optionally and many people enjoy them with just a little salt. You can make a great meal out of this fish, but they also make for a delicious appetizer or snack. 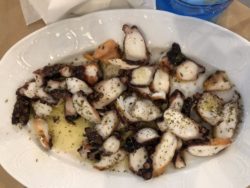 Lobster isn’t widely available in Greece but when it can be found, it is absolutely worth eating! Greek lobster are slightly different than the cold water lobster we find in the United States. They look a little different and also their meat has a slightly different flavor. It is usually served grilled and drizzled with olive oil and lemon and then finished with Greek sea salt. Here’s a recipe for Greek style grilled lobster.

Octopus is another seafood that is common in Greece. If you are traveling there, you won’t want to miss the chance to order it! Octopus has a reputation of being tough, but thanks to the way it is handled, Greek octopus is extremely tender. Visit this article for more information on how it is prepared as well as some ideas for how to cook fresh octopus yourself.

Here are some recipes that include octopus:

As you can see, many of these fishes are fairly well known. However, by the time they get to most stores throughout the world, they aren’t necessarily fresh. In order to really experience the flavors of Greece, it’s worth it to try to sample these foods whenever you get the chance. You know that most tavernas and restaurants likely purchased the fish after it was just caught, or they could have been the ones to catch them!

Greek cuisine has a lot of delicious recipes that use many of these types of seafood. Check out our seafood recipes section for some ideas.