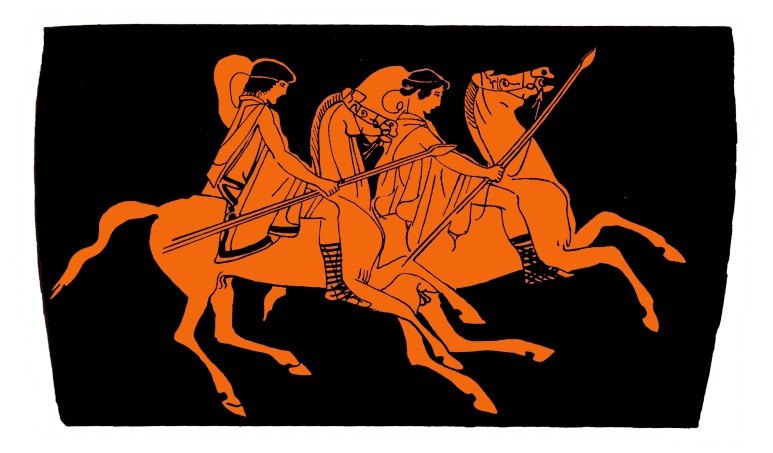 Have you ever watched a movie that was set in Ancient Greece? If so, then chances are you had the privilege of watching the fight scenes. Movies such as 300, which popularized the Spartans’ last stand at Thermopylae against the Persians, often give a fairly accurate portrayal of Sparta’s fighting tactics. The makers of that movie, for example, did their best to make sure the fight scenes were as historically accurate as possible.

Even though the Ancient Greeks lost that particular battle at the pass in Thermopylae, they ultimately won the war against the Persian army. The Persians far outnumbered the Greeks. However, the Ancient Greek warriors used their individual strength and tactical knowledge to their advantage. What made them so successful?

Aside from the professional soldiers for which Sparta was known, most of Ancient Greece was comprised of the militia. They were every day people who had homes, families, and even jobs. However, with the threat of invasion imminent, they banded together and fought against their enemies. When the Greek city-states weren’t fighting amongst themselves, they were joining together to fight a common enemy, like the Persians.

The Legendary Phalanx and Hoplites

One thing the popular movie, 300, highlighted was the style of fighting that involved the Phalanx. Ancient Greek soldiers were called hoplites, which was derived from the name of their shield, the hoplon. The hoplon was a heavy shield that spanned about three feet in diameter and had a rounded shape designed for resting on their own shoulders.

As a result of this design, the soldiers were able to form a wall with their shields. This wall was called a Phalanx. Also, the soldiers who formed these walls also held a spear. The Phalanx soldiers used their shields to protect each other while also using their spears to inflict damage on their opponents.

The magic of the Phalanx happened not only in the individual rows but also in the fact that most phalanx units came together to form multiple rows, often as much as fifty rows of soldiers depending on the strategy employed by the army. In larger phalanx units, the back rows saw relatively little action, whereas the front rows enaged the majority of the fighting. Because most phalanx soldiers desired to find “glory” in battle, the first few rows were highly prized and sought after.

Other Types of Soldiers in the Ancient Greek Army

A well-formed Ancient Greek army, however, didn’t just have a phalanx. What made the Ancient Greeks so effective was the sheer diversity in their troops. They also had a cavalry, archers, and light infantry. The cavalry worked to protect the phalanx and to break up the ranks of the enemy. Archers would shoot from a distance to help confuse the enemy. The infantry also helped protect the phalanx while also inflicting damage to the enemy. Athens, one of the most powerful city-states, also had a formidable navy.

As you can see, the soldiers of Ancient Greece had a sophisticated fighting style. When they allied with each other over a common enemy, such as the Persians, they were highly effective. By the time Alexander the Great became the king, the Ancient Greeks had honed their fighting style and used that to conquer a good portion of the ancient world.