Written by GreekBoston.com in Ancient Greek History Comments Off on Battle of Notium – A Spartan Naval Victory 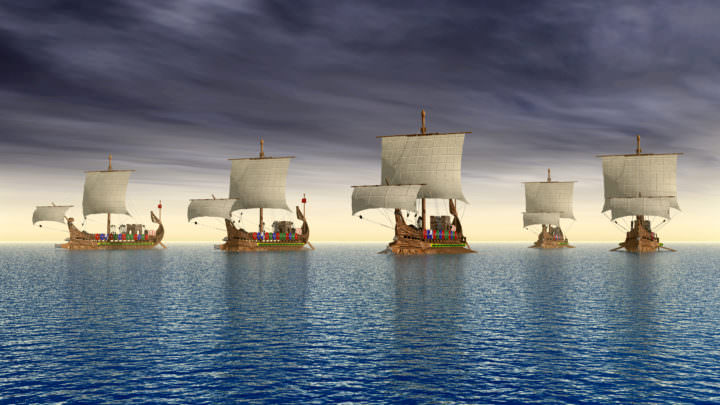 The Battle of Notium is looked at as a successful naval victory for the city-state of Sparta during the Peloponnesian War, which occurred between Sparta and Athens. At the time, Athens was known for their naval strength, but this battle shows that Sparta was able to hold its own. Here’s more information:

Information About Battle of Notium

The Battle of Notium occurred in 406 BC and was a victory for the Spartan Naval. Prior to the occurrence of the battle the Athenian commander, Alcibiades, left his Athenian fleet in the hands of his helmsman Antiochus. Alcibiades’s fleet was blocking the fleet of the Spartans in Ephesus.

Antiochus went against his orders and tried to draw the Spartan fleet into battle by using a small decoy force to tempt them. His strategy was ineffective and the Spartans were victorious over the Athenian fleet. This resulted in Alcibiades’s downfall and Lysander became established as a commandeer capable of defeating the Athenians while at sea.

Lysander became the commander of the Spartan fleet in 407 BC. He sailed across the Aegean, reached Ephesus and created his base. He began with seventy triremes and established diplomatic relations with the Persian prince Cyrus. The prince provided the funds to increase the payments for the Spartan rowers which enabled them to entice the more experienced rowers of the Athenian fleet.

Alcibiades came to Notium with his fleet to force Lysander into battle. He watched their fleet but was unable provoke Lysander into a fight. Alcibiades then set sail to be of assistance to Thrasybulus during the siege of Phocaea. The fleet left behind was commanded by Alcibiades’ helmsman. There was only one order given to Antiochus. He was ordered not to attack Lysander’s ships but disobeyed this order.

What Happened During the Battle

Antioch sailed to Ephesus to draw out the Spartans. His plan involved getting the Peloponnesians to pursue his ships so the Athenian forces could ambush them. Antiochus was killed when his ship sunk due to an attack by the Spartans. The remaining ships were chased back to Notium and the Athenian force was not prepared for the entire Spartan fleet. Fifteen Athenian triremes were captured during the battle and an additional seven were sunk. The victorious Spartans went back to Ephesus and the Athenians returned to Notium.

Once Alcibiades heard about the battle he lifted his siege on Phocaea and went back to Notium to reinforce the fleet. He was unable to draw out Lysander and the fleets watched one another across the water. The loss of the battle at Notium was Alcibiades’s political downfall.

After his victory at Cyzicus, Alcibiades was once again in favor. He had been given his command with a lot of heavy expectations. His unfortunate appointment of Antiochus caused a severe defeat that gave his political enemies the chance to take action and he was removed from his office. He never returned to Athens and sailed to the land he owned in the Thracian Chersonese. Other than the brief appearance he made at Aegospotami his involvement had come to an end.