Written by GreekBoston.com in Ancient Greek History Comments Off on The Early History of the Athens City-State 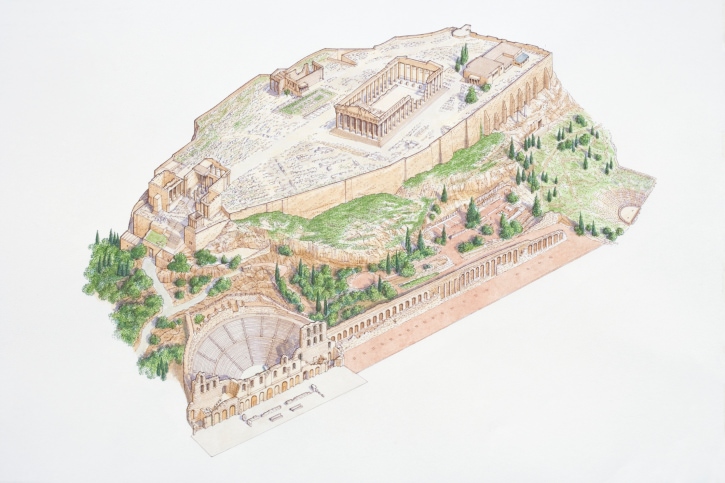 Today, Athens is the capital of Greece and also its largest city. It is Greece’s cultural, economic, and financial center. The city has experienced both phenomenal growth and also dramatic heartbreak. After all, it’s one of the oldest cities in the world with a history that spans over 3400 years. Humans have been in that area for over 7000 years. However, how did the city-state of Athens actually get started?

How Athens Got Its Name

In Ancient Greece, Athens got its name because of competition between the gods and goddesses. In its final stage, the contest was down to just two competitors – Poseidon and Athena. Under the guidance and mediation of Zeus, both made a proposal and submitted it to the people. If the offer were accepted, they would be responsible for naming it.

It was Athena who was victorious. She gave the city the first olive tree, which was not only a symbol of wisdom, but it also provided the people with the olive whose fruit provided them with nourishment and an important item for trade. Poseidon’s gift, which was to honor the citizens with success at war in the sea, was still appreciated. Athens was known for its formidable navy.

Origins of the City-State

Like all city-states in Ancient Greece, Athens evolved over time. There is evidence that the first humans settled in the area around the 4th Millennium BC. However, it wasn’t until the Mycenaean Civilization that the region started to grow in importance. By around 1400 BC, the Acropolis in Athens boasted an impressive fortress.

Over time, the Mycenaean fortress at the Acropolis evolved. It was used for protection, as the center of their government, and as a gathering spot for the population. Sometime after its initial construction, a large stairway was built there as a way to help protect the city’s water supply. The city-state pretty much emerged around this acropolis. As the population increased, so did Athens’ influence.

The Height of the Athenian City-State

The Athenian city-state reached its peak in the Bronze Age. It is known as being the birthplace of democracy. Athens was also an economic powerhouse. Literature, philosophy, and art also thrived during this time period. Theater was also an important art form. Athens hosted an annual festival that honored the god, Dionysius, and featured many theatrical performances.

Athens was also a military powerhouse, particularly its navy. Its location was an ideal center for travel and trade by sea. It also made the Athenians vulnerable and as a result, they fortified their navy to help protect them from invaders. In the war against the Persians, it was the alliance between Athens, who had a strong navy, and Sparta, who had a strong Army, which ultimately prevented a Persian conquest.

Today, Athens is still an important city in Greece. As the capital, it is the center of government, economics, and of Modern Greek culture. However, this all may not have been possible if it weren’t for Athens’ influence and importance in Ancient Greece.