Written by GreekBoston.com in Ancient Greek History Comments Off on Get to Know the First Peloponnesian War 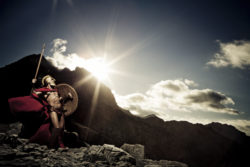 The Peloponnesian Wars took place over a longer span of time in the form of three different wars. Each war involved the same to rivals – Athens and Sparta. The First Peloponnesian War occurred between 460 and 446 BC. The two city-states had been rivals for some time, but their differences ultimately led to a series of wars. Here’s more information about the first of these wars:

Before the War Began

Just before the war began, Sparta had become the leaders in the Hellenic league and had been victorious over several crucial victories in 480 and 479 BC. After the Greco-Persian wars, Athens grew and developed into a strong and significant enough force to concern Sparta. Athens began to rebuild its navy and city walls. In addition, the policies of Athens and Sparta became quite different. Athens wanted to expand its territory, while Sparta wanted to break up Athens’ democratic regime.

Causes of the First Peloponnesian War

Athens had become an international force that was eager to take leadership in the Aegean. Sparta did not approve of the Athenian’s newly build walls. In 479 and 478 BC, Athens also began to take an increasingly active role in campaigns in the Aegean. Also the Athenians began leading the Delian League, which was a conference of the Aegean and Ionian states at Delos.

Influenced by Themistocles, the Athenians secretly build their wall for protection and delayed talks for arms control with Sparta. The main causes of the conflict between the two Greek factions include the Athenians’ building of long walls, Megara’s defection, and Sparta’s concern about the growing power and influence of the democratic Athenian Empire.

About the First Peloponnesian War

According to Thucydides, Sparta decided to invade Attica in mid 460s BC but was stopped by an earthquake which triggered a helot revolt. This helot revolt caused the Spartans to summon all of their allies to quell the helot revolt. The Athenian troops managed to insult the Spartans and they dismissed the Athenian’s help. Athens responded to the dismissal, and events spiraled in to the First Pelopnnesian War. Both Sparta and Athens rounded up their allies and war began. In 460 BC, Athens was in open war with Corinth and other Peloponnesian states, and an even larger war was soon to come.

At first, the Athenians were better fighters and won more battles due to their significantly better naval capabilities and superior fleet. Athenians were also more successful fighting on land until 457 BC, when the Spartans defeated them at Tanagra. The Athenians then scored a victory of the Boeotians at Oenophyta, where they captured all of Boeotia except Thebes. Athens then made Aegina a member of the Delian League. By 454 BC, Boeotia revolted and defeated Athens to regain their independence.

Conclusion of the First Peloponnesian War

The First Peloponnesian War ended when Sparta and Athens and their allies met to arrange the Thirty Years’ Peace during the winter of 446-445 BC. This peace treaty included Athens’ dominion of the sea, and Sparta’s dominion of the land. Both sides kept the main parts of their empires.

Megara returned to the Peloponnesian League and Aegina became an autonomous but tribute-paying member of the Delian League. By 445 BC, Sparta and Athens broke treaties and were back at war in the more conclusive Second Peloponnesian conflict.