Do You Know About the Library of Alexandria?

Home > Greek Culture > Ancient Greek Histo… > Do You Know About…

Written by GreekBoston.com in Ancient Greek History Comments Off on Do You Know About the Library of Alexandria? 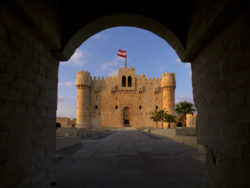 Most of us know that Alexander the Great built a great empire. However, when he headed east to add to his empire, however, he did more than just add to his borders. Alexander set up colonies throughout his new territories and in doing so, he spread the Hellenic culture, as well.

He also founded cities, and the great city of Alexandria, which is now in modern-day Egypt, was one of them. This city had a great population but one thing it was truly known for was its great library. Here’s more information about this library:

Interesting Facts About the Library

It is interesting to note that the city of Alexandria was founded in 300 B.C. and the library itself was founded around 330 B.C. The exact dates of the library’s construction and completion are unknown, however. Another interesting thing about this library is that the library was actually built after Alexander lost his life. Some believe that this building was one of his crowning achievements because it contained a vast collection of knowledge from all over the ancient world. It is also widely accepted that the library itself was dedicated to the Muses of Greek Mythology since they represented knowledge and creative pursuits.

Ptolemy Lagides officially gets the credited for founding the Library of Alexandria. He envisioned a library filled with important works and he wanted the collection to be vast and comprehensive. Alexander was assassinated in 323 B.C. and shortly after that, Ptolemy, one of his generals, made plans to have the library built. After Alexander died, Ptolemy began governing this part of Alexander’s conquests. Less than a decade after that, the library was built.

It is interesting to note that the origins of the library itself are under dispute. One theory states that Ptolemy was the founder, and this is one of the most widely accepted. However, other sources claim that Demetrius of Phaleron, who was the philosopher Aristotle’s scholar, was the founder of the massive library. Ptolemy II, the son of Ptolemy Lagides, also gets the credit for being the library’s founder.

The Library of Alexander was a massive structure that contained an impressive collection of ancient scrolls. However, we don’t know exactly what was contained within the library because a massive fire burned it to the ground. It is unknown what works were in the library as well as how many of these works survived after the fire. We also don’t know if any knowledge was lost or if there were copies. It is likely, however, the much of the information inside it has been lost. We do know what the library looked like, however, by analyzing descriptions of it in other works.

As mentioned above, this great library was burned to the ground when Alexandria burned. The destruction took place in 391 B.C., roughly sixty years after the library was built. It is unknown how much was lost because of the fire.