Written by GreekBoston.com in Ancient Greek History Comments Off on Structure of the Spartan Army 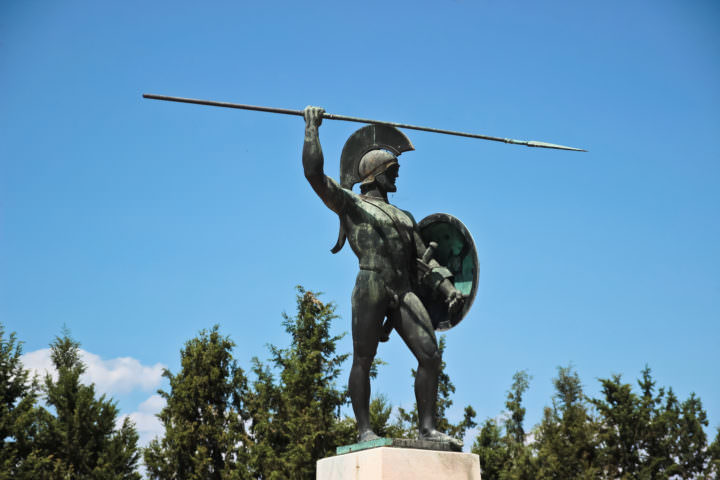 The Spartan Army is legendary just as much today as it was back in Ancient Greece. Sparta was a city-state in Ancient Greece, and because of its army, it was one of the most powerful, especially from the 6th Century B.C. to the 4th Century B.C. They not only had an army, but adopted a full military society. Here’s more information about the formidable Spartan Army and what it meant for the city-state of Sparta:

About the Spartan the Army

There were three classes of people in Sparta. Spartans were the only ones who had the full rights of citizenship. They were greatly outnumbered by the helots, who were slaves of the state. The perioeci were neither slaves nor full citizens. Helots worked the land for their masters, and as they resented their enslavement they rebelled regularly. Because of this, the Spartans declared war on them once a year to cull any helots who seemed rebellious. Yet, in times of emergency both the perioeci and the helots were placed under arms.

The army was especially known for its sense of discipline, and the structure of the disciplinary protocols and the of the army itself was said to have been invented by Lycurgus. Those living in Sparta were looked at as possessions of the state, and if a baby was deemed to be weak or deformed at birth they were exposed on Mount Taygetus. Spartan boys were trained to join the army from childhood. When they were seven years old, they were taken from their families and enrolled in a 15 member unit. These boys did everything together and endured severe discipline. The bravest boy in the unit was made captain, and the other boys obeyed his orders and took whatever punishments he meted out.

Learning the Art of War

As the boys grew, they were schooled in religion and the art of warfare. They were taught The Iliad, which is the first poem to mention the Spartan army and songs that extolled warfare and the gods. Between the ages of 20 and 30, the young men served as cadets and were responsible for suppressing the helots.

If the Spartan cadet survived to age 30, he became a citizen and was allowed to marry, attend assembly meetings and hold public office. The 23 years of military training created men who were hard, extremely disciplined, blunt of speech and conservative.

The first iteration of the Spartan army was developed during the Mycenaean age. It was largely an infantry whose soldiers, or hoplites carried a spear, a short sword and a bronze shield made in a figure 8. The Spartans did not develop a cavalry until the Peloponnesian War, and it was not extensive. Military tactics were simple, with lines that were eight to 12 men deep fighting to their right, then to their left. When the contest was settled, the losers were allowed to withdraw.

During the Mycenaean age, the army was divided into lochoi, which was made up of 1000 men. There were seven lochoi which were then subdivided into pentekostyes, then divided further into enōmotiai for a total of 3584 troops. This arrangement became even more complex after the Peloponnesian War.

The Spartan army was one of the most successful and well-trained armies in history. However, the strictures of Spartan society and its unbending conservatism led to its destruction.