Written by GreekBoston.com in Modern Greek History Comments Off on Greek Resistance Forces in Operation Harling 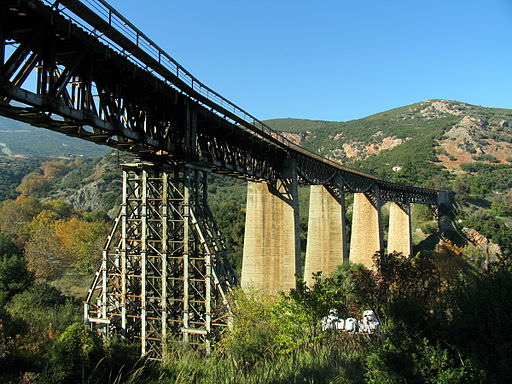 The communist-backed National Liberation Front (EAM) established its military division called the Greek People’s Liberation Army (ELAS). On the other side of the political line, the National Republican Greek League (EDES) formed as the major non-communist resistance group. Their military arm, the National Groups of Greek Guerrillas (EOEA) joined forces with the ELAS in the fall of 1942 along with British forces in an operation known as Operation Harling. The operation was a significant point of the war in that it was one of the first major acts of sabotage against the Axis powers.

The British Hatch a Plan

During the War, the British government established the Special Operations Executive (SOE) an organization to fight within occupied Europe, aid local resistance groups, and commit espionage against the Axis powers. Over the summer of 1941, the SOE devised a plan to sever Germany’s access to supplies by destroying parts of the railway that connected Athens to Thessaloniki, the country’s two largest cities, and major points of interest for both sides.

Three different points of location were targeted during the planning of the operation and included the Asopos, Gorgopotamos, and Papadia bridges. The original plan required the parachuting of British troops to one of the points of interest, led by Lt. Colonel Eddie Myers of the Royal Engineers and Major Chris Woodhouse, the second-in-command. Once the mission was completed, the British troops were to be evacuated, except for Major Woodhouse who would stay behind as a liaison between the British forces and any of the Greek resistance armies.

Miscalculations by the British

The SOE sent 12 men divided into three groups on the mission. Colonel Myers, Group B by Woodhouse, and Group C by another official, Major John Cooke, led group A. Major Cooke’s group ended up landing outside of the town of Karpenisi, which was under heavy watch by the Axis troops. In fact, one member of the team ended up landing inside the town and was taken in by the locals and hidden from search groups from the Italian forces. The group led by Myers also soon came under the protection of the local Greeks and it was through these actions that the SOE was put in contact with both the EOEA AND ELAS forces.

With a target date set for November 25, 1942 – a band of 150 men were put together for the operation. The group consisted of the 12 members of the British forces who would be in charge of demolition, and 86 men from the ELAS and 52 from the EDES whose jobs were to provide cover for the British troops so they could successfully destroy the bridge. The troops ultimately decided on the Gorgopotamos Bridge as their target and on November 25, they set off on their mission. The Greek ground troops attacked the outposts at both ends of the bridge during which time British demolition team was sent in. Soon explosions were set off which first damaged the central portion of the bridge followed by subsequent blasts that took out the remaining portions.

Miraculously the British/Greek team survived the attack, returning with only four wounded soldiers from the ordeal. While other attempts of resistance by both the Greek and British forces were nowhere near as successful as Operation Harling, the occasion set new hope among the Greeks and fueled the drive for resistance against the Axis forces.