Written by GreekBoston.com in Ancient Greek History Comments Off on History of Venetian Rule in the Ionian Islands 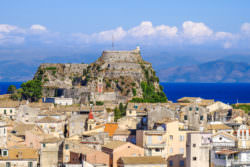 Although the Ionian Islands are currently part of Greece, it wasn’t always this way. In fact, Greece as we know it is a relatively modern thing and it was only established after the Greek War for Independence. In fact, some places in Greece, such as Crete, became part of Greece much later than that in the early 1900’s. Prior to that, Greece had a turbulent history. The Ionian islands, which include Corfu, Kefalonia, Lefkada, and Zakynthos, were no exception and at one point, they were even occupied by the Venetians.

Although Venice nowadays is just considered to be a city, at one time, it was a mighty republic. At the time, the leaders were focused on acquiring land and spreading their influence all over the world. Since Greece was so close to Venice, they set their sites on occupying some of the lands in Greece. They did so over a period of several centuries and the islands remained in Greek control until the Republic collapsed. Here’s more information about this part of history:

About the Venetian Rule of the Ionian Islands

The Venetians occupied the Ionian islands in modern-day Greece for nearly 4 centuries. They arrived in the mid 14th Century A.D. and left in the late 18th Century A.D. Evidence of their occupation still exists on these islands, particularly because many of the massive fortresses that they built are still standing today. However, some are in better shape than others. However, some of the islands, such as Kythera, were occupied much earlier than the rest of the Ionian islands were. For example, Kythera began to have a Venetian presence in the 1200’s, but then they established a permanent presence there in the 1300’s.

Here’s a summary of when each of the islands were occupied:

Venetian control of the Ionian Greek islands lasted for several centuries. Lefkada, however, was one of the last to succumb to Venetian rule. They didn’t have to endure occupation for long, either, because the Republic of Venice was dissolved just a few decades after Lefkada became part of it. The Republic officially ended in 1797 and at that time, control of these islands was restored to the people.

It is interesting to note that Venetian occupation of these islands happened at the same time as the Ottoman occupation of much of the rest of Greece. After the Venetians left, some of these places fell under Ottoman control.