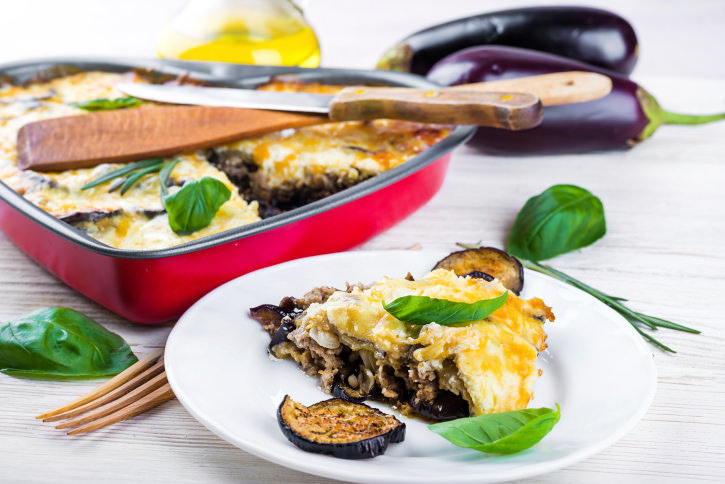 Vibrant green olive oil drizzled over a slice of bread. Bottles of red wine within arms reach at the table. Chocolate baklava made with walnuts and decadent chunks of dark chocolate. Greek cuisine is both old and new. It is constantly evolving and changing but at the same time, it always remains the same.

Chefs merge Greek food with other cultures as a reflection of the people’s need to experience things a little differently. Yes, Greek people enjoy and embrace their traditional foods. They always enjoy bringing in elements from other cuisines when it suits them. Even though Greek cooking is entirely its own (very delicious) thing, there have been outside influences. Greek cooks seem to improve on these foreign techniques and make them even better. French cuisine is one of those that has influenced Greek cooking, but the resulting dishes are so delicious and traditional, it doesn’t even matter what the origin is!

In many ways, Greek cuisine is the opposite of French cuisine. While French cuisine is considered refined and often fussy, Greek cooking is flavorful while still being easy to execute. Making tomato soup in modern French cooking, for example, may require blanching and peeling the tomatoes before adding them to the soup.

In a popular Greek soup called Manestra (tomato soup with orzo), the tomato is added to the soup whole without peeling and with the seeds still inside. Knowing this, how is it possible that French cooking could possibly have had an influence on Greek food?

Not only that, but traditional Greek cuisine focuses on fresh ingredients prepared simply. Home cooks throughout Greece prepare foods whose techniques, ingredients, and recipes have been handed down through the generations.

When non-Greeks think of Greek food, they remember things like moussaka and pastitso, which are decadent and involve creamy sauces. It is foods such as these that people outside of the culture think of when they visualize Greek cuisine. It is these foods that have been most influenced by French cuisine. Even though they are an integral part of the Greek kitchen, they aren’t necessarily considered “traditional”.

Perhaps the biggest reason why French cooking has played a part in shaping elements of Modern Greek cooking is because of a chef named Nikolaos Tselementes. As a chef he was trained in Vienna and then worked as a chef for several embassies throughout Europe.

He was also a food writer and was most known for his work in food magazines such as Cooking Guide. He wrote one cookbook called Greek Cookery, which was published in 1950 and was his only book in the English language. This became a manual for Greek cooks throughout the world.

Aside from being an influential food writer in his day, his legacy can still be felt within the cuisine. It is because of his influence that things like bechamel sauce and bouillabase made its way into Greek cuisine.

Note that bechamel sauce is featured in dishes such as pastitso and moussaka. Versions of these dishes existed before bechamel sauce entered the picture, but it’s that sauce that gives them the creamy textures that have made them so popular.

Traditional Greek cooking is simple. However, it is always evolving. In the twentieth century, Greek cuisine was influenced by French cuisine, largely because of an influential chef named Nikolaos Tselementes. There is some debate as to whether or not his influence was positive or not.